BJP's Mega Push: Rallies in All 70 Seats in Delhi as Campaigning Ends Today 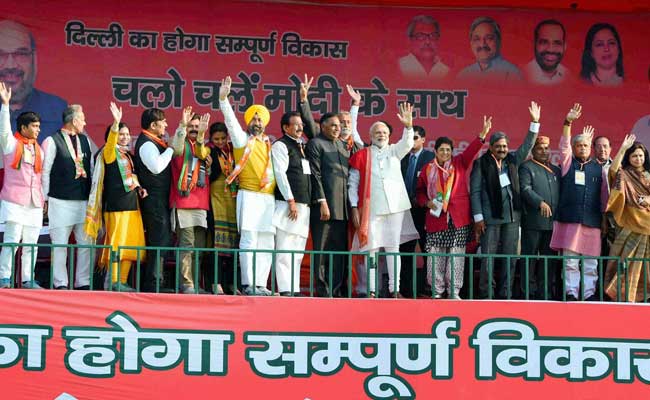 In a final push to woo voters, Union ministers and BJP parliamentarians will hold at least one rally in each of the 70 constituencies in the national capital today on the last day of campaigning for the Delhi assembly elections.

Candidates of political parties and other leaders can campaign till 6 pm today, 48 hours before the polling day on Saturday.

"Union Ministers and party MPs have been asked to hold at least one rally in the 70 Assembly constituencies each so that people can also be wooed by the party at the last moment," said a BJP leader.

Party president Amit Shah had said that the BJP was in a direct fight with the Arvind Kejriwal-led Aam Aadmi Party in this election.

He also said the party would win the polls riding on the leadership of Prime Minister Narendra Modi and the work done by his government.

Eyeing a return to power after a gap of 16 years, the BJP has fielded 120 MPs, including a number of Union ministers, into campaigning for the election.

Several party workers from Madhya Pradesh, Haryana and Maharashtra have been camping in the national capital for the campaigning exercise.

"Tomorrow, we will go with full strength. Small rallies and roadshows will also be carried out in different parts of the city," the leader said on Wednesday.

More than 1.20 lakh booth in-charge and 'panna pramukhs' have been roped in to campaign and apprise people about the BJP's plans for the city, he said.
Comments
Delhi elctions 2015assembly polls in delhiBJP election ralliesBJPpolls in DelhiDelhi assembly polls