It is unbelievable, it has been long pending: Jwala 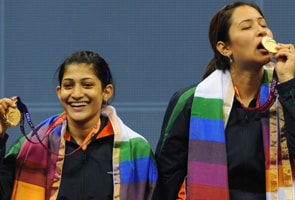 New Delhi: Moments after winning the first women's doubles gold for India at the Commonwealth Games along with Ashwini Ponnappa, ace shuttler Jwala Gutta on Thursday said it was "unbelievable" and the feeling will take time to sink in.

"It's unbelievable. I think it was long pending for me. I am quite emotional. The feeling is yet to sink in. Ashwini played exceptionally well and we hope to continue the good work," Jwala told reporters at the press conference.

"I want to dedicate the medal to my family who stood by me, my coaches, especially SM Arif, Atik Jauhari and all the team members, Gopi. I owe this medal to all who helped me," she said.

"It was not a comfortable match. Both the parties had to fight for the points in rallies. We were just focusing on the point and not bothering about winning or losing," she added.

Jwala hoped this win will give a fillip to the doubles game in the country and people will take doubles more seriously.

"Doubles is an interesting game but somehow it never gets its due. I hope after this win we will understand the importance of doubles. It really hurts when we read headlines like 'doubles failed miserably'. I don't understand such statements. I hope from now on the focus will be on the players' performance, rather than, you know what I mean," she said.

In the second game, at 18-18, the Indian duo was awarded a point that helped them nose ahead after the Singaporeans didn't receive Jwala's serve saying they were not ready.

The Singapore pair protested but the chair umpire stuck to his decision.

Asked about the controversial point, Jwala said, "I think the umpire was fair because the girl had put down her hand and it was then that I served, after which she immediately again put her hand up. She had also taken a step back."

Asked about what she was telling Ashwini during the match, Jwala said she just asked her to calm down and concentrate on the moment.

"I was just telling Ashwini to calm down and keep focusing on the moment and forget the missed opportunities.

Even I missed a tab when we were 19-all. I think Ashwini served late and it cracked the Singaporeans. She was excellent at the back court and it helped me finish it off at the nets as I am a good net player," she said.

Jwala and Ashwini came together after the former split with her long-time women's partner Shruti Kurian during the Indian Open Grand Prix in Hyderabad.

"I had approached Ashwini because I thought me and Shruti were not going anywhere. I asked Vimal sir and he thought it is a good idea. She was new to international circuit. But she grew very fast.

"She grabs things very fast and we share similar taste so it is easier to communicate in the court. I am sure she will go on to be one of the best doubles player," Jwala said.

Ashwini, whose power-puffed smashes left her opponents awestruck, said she was ecstatic and elated to win the gold.

"I am really elated to win this medal. I want to dedicate this to my family and coaches and the whole team," she said.

Ashwini also had some nice words about Jwala.

"She is very supportive. She is never angry. I at times brood over a loss point but she keeps repeating it to me that I should not worry of miss opportunities and it helps," Ashwini said.

Promoted
Listen to the latest songs, only on JioSaavn.com
"We had played this Singaporean pair before. The first one was at the Indian Open. They were targeting me but I just had to apply my intellect and it was ok," she added.