Woman Raped In Delhi Threatened With Fate "Worse Than Unnao"

The woman was raped in Delhi's Mukherjee Nagar last year and had filed a police complaint last July. The rape-accused was arrested by Delhi Police and subsequently released on bail on Wednesday. The pamphlet surfaced around the same time. 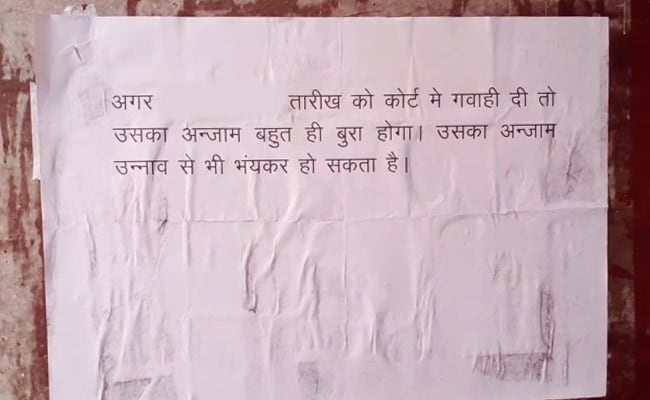 A pamphlet with the threat was pasted outside the rape survivor's home in Baghpat.

A rape survivor was threatened with consequences "worse than Unnao" if she testified in court against her rapist, in a pamphlet put up on her house at her village in western Uttar Pradesh's Baghpat, 53 km from Delhi. The message warning her against giving a statement before a Delhi court on Friday was pasted outside her home, the police said on Thursday.

The word "Unnao" in the threat sums up the tragedy of a young woman was beaten and set on fire by her alleged rapists last week on her way to a court hearing on her case. The woman died at a hospital in Delhi of 90 per cent burns.

The woman who was threatened with a similar fate was raped in Delhi's Mukherjee Nagar last year by a man from her village and had filed a police complaint in July. The rape accused was arrested and subsequently released on bail yesterday. The pamphlet surfaced around the same time.

"She said that the incident took place about a year ago when she was taken to a friend's place by Sohran Singh where she was given drugs in a beverage and then raped. The accused made a video of the incident and used it to blackmail and rape the victim again," Pratap Gopender Yadav, a senior police officer in Baghpat.

The accused has been arrested again from Badaun in western Uttar Pradesh. The police have also provided her security.

"There is no problem with her security now," the officer said.

"The woman's father works as a driver in Delhi. Yesterday, when they returned to their house in the village, they found the note pasted on the wall of their house," Mr Yadav said.

The man accused of raping her, however, said that some of his rivals in the village had put up the posters to implicate him.

The Unnao case had raised many questions including whether rape accused should be released on bail. The 23-year-old woman was set on fire by five men including the two alleged rapists. One of the two had been released just days before the incident. The woman was on her way to board a train to Rae Bareli to attend a court hearing in the rape case when she was doused with kerosene and set ablaze last Thursday. The Yogi Adityanath government came under fire, with the opposition parties attacking the ruling BJP. The Chief Minister said the case would be heard by a fast-track court.