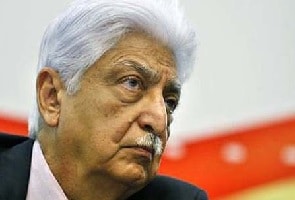 Bangalore: Wipro chairman Azim Premji on Wednesday said the company is focused on strong profitable growth and will make investment in both organic and inorganic growth areas.

Addressing the company's 68th annual general meeting in Bangalore, he said the firm was focused on profitable growth and enhancing shareholder value.

Mr Premji also said the company will make investments in both organic and inorganic growth areas.

This comes less than a week after Wipro announced it has entered into a multi-million dollar dual pact with Canada's ATCO through which India's third largest software services company will provide a complete suite of outsourcing solutions to the Canadian firm as well as acquire its IT services arm.

He further said Wipro is investing on its staff and training them.

In addition, Mr Premji also told investors that succession plans for the leadership at Wipro "is strongly in place".

This came in the wake of concerns over leadership succession plans in IT services firms, which have seen series of top level exits at Infosys, another IT major.

Siddaramaiah and sought speeding up of departmental clearances, including those relating to environment and forest, as part of setting up of Kodathi SEZ project here.

The SEZ is expected to create around 25,000 jobs in its first phase.

Promoted
Listen to the latest songs, only on JioSaavn.com
Comments
Azim PremjiWipro