Will Be There As Long As I'm Needed, Not A Day Longer, Says Nandan Nilekani

Nilekani was brought on-board in August last year, after the then CEO Vishal Sikka resigned. 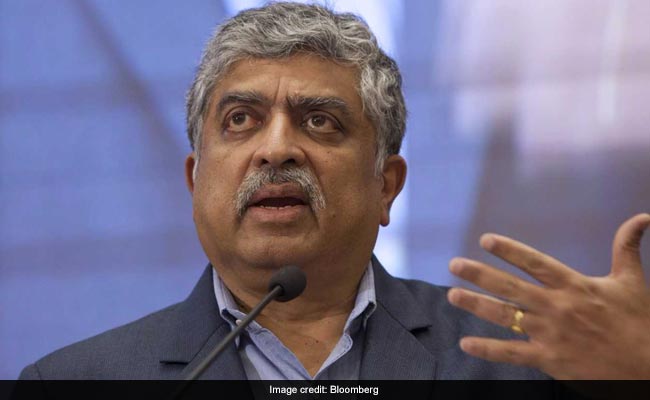 Salil Parekh has been appointed as the CEO of Infosys

New Delhi: Infosys non-executive Chairman Nandan Nilekani today expressed satisfaction at the progress made in bringing stability to the company, saying he will stay only "as long as required".

Nilekani was brought on-board in August last year, after the then CEO Vishal Sikka and ex-Chairman R Seshasayee had resigned following a bitter boardroom tussle. Nilekani, who is one of the co-founders, was mandated with steering the company back on track after protracted row between the founders and the past management over  allegations of corporate governance lapses.

He was also mandated to find a successor to Sikka, a search that culminated with the appointment of Salil Parekh as CEO and MD earlier this month.

Speaking to the media and analysts after announcing the third quarter financial results, Nilekani said Parekh has brought stability to Infosys.

"It (Infosys) has already settled down, it is absolutely stable and I think we have moved very quickly," he added.

When asked on how long he intended to continue his tenure, Nilekani said: "I will be there for as long as required, and not a day longer.

"One phase of what had to be done is done. We brought stability. The Board is completely united on the purpose and responsibility. Salil has joined as CEO, the company is focusing on business and growth... whatever time it takes, I will be there."

He highlighted that multiple steps have been initiated over the last few months to bring back order in the company.

"We have done a strategy refresh and Salil is taking that area forward. He is holding an investor day in April, he is going to meet the customers," Nilekani said.

The new CEO will also dedicate his time to strengthening the leadership at the company, he added.
Infosys also said that one of its three presidents, Rajesh Murthy, has resigned citing personal reasons.
The resignation of Murthy, who has been with the company for 26 years, marks the first senior-level exit under Parekh's leadership.

Murthy was responsible for Energy, Utilities, Telecom and Services and also led Infosys' consulting and Europe business. Infosys had formed a Committee of Directors in April, 2017 to support and advise the management in executing the company's strategy.

"With the appointment of Salil Parekh as the CEO and Managing Director of the company, the Committee of Directors stands dissolved with effect from January 12, 2018," the company said in a statement.

Promoted
Listen to the latest songs, only on JioSaavn.com
Also, Infosys Board has re-designated Pravin Rao as the Chief Operating Officer and whole-time director with effect from January 2, 2018. He had assumed the role of interim-CEO and MD while the company conducted its CEO search.