Why The Fate Of Samsung's Billionaire Heir Turns On Horses

Jay Y Lee took a more active and urgent interest in the matter after a second meeting where Park told him again to "buy a good horse," said the court. 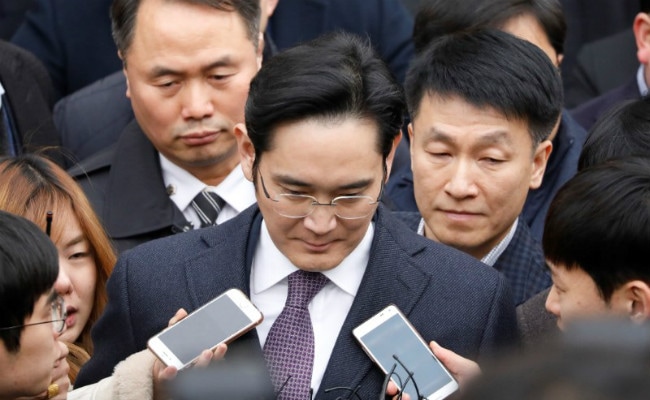 After serving a year in prison, Jay Y Lee was freed in February 2018.

South Korea's highest court stunned the nation when it ordered billionaire Samsung heir Jay Y Lee to face trial once more for corruption. And it all came down to three horses.

The Supreme Court on Thursday ordered the retrial of the Samsung Electronics vice chairman over bribery charges, reviving uncertainty around the country's most important company just as it's navigating global trade turmoil. The court also sent for retrial the case of former president Park Geun-hye, the alleged beneficiary of that bribery.

The matter connecting them is a gift of three equines, which Korea's most senior judges have now ruled should be considered a bribe. Valued at 340 crore won ($2.8 million), the three horses push up the total alleged bribery amount to a tier where Jay Y Lee could face a minimum of five years in prison with no possibility of a suspended sentence.

This more assertive judiciary stance may signal a change in the way Korea's government scrutinizes its chaebol, the large family-controlled conglomerates like Samsung, and looks like a step toward reining in their power and influence. For Samsung itself, this new chapter will at best be a distraction that the company can ill afford as it grapples with a downturn in its major businesses of displays, memory chips and smartphones. At worst, it could deprive the company of a charismatic leader with a global network of useful connections and relationships.

"Horses became a contentious issue for this trial because the value could sway the punishment against Lee," said Jungkeun Lim, attorney at TY & Partners in Seoul. "This is a matter of imprisoning Lee or not."

The stock market hasn't been panicked by the news, with Samsung shares sliding by as much as 2.5 per cent on the day of the Supreme Court ruling before recovering in trading on Friday. The stock ended 1.4 per cent higher in Seoul.

The bribery saga goes back to a one-on-one meeting between Jay Y Lee and Park on September 15, 2014, the top court's written judgment said. Jay Y Lee, the de-facto heir of the Samsung Group, was asked for a horse for the daughter of Park's close friend and confidante Choi Soon-sil, the document said, which Lee passed along and would later go on to take a personal interest in by checking for updates, according to the court.

The original 2017 trial centered on a controversial merger in 2015 between two Samsung affiliates that gave Jay Y Lee fresh shares in Samsung C&T Corp., then a major shareholder of Samsung Electronics. Prosecutors argued that Lee sought to ensure the deal passed by indirectly bribing the president at the time. Jay Y Lee and Samsung have denied any wrongdoing.

The ruling from the Supreme Court this week said that Lee and other Samsung executives offered three horses -- named Salcido, Vitana and Rausing -- to former president Park's friend Choi. Jay Y Lee was aware of the close relationship between Park and Choi and secretly offered the horses to Choi's daughter Jung Yoo-ra, a professional equestrian athlete, said the court documents.

Jay Y Lee took a more active and urgent interest in the matter after a second meeting where Park told him again to "buy a good horse," said the court. The details of the process were decided by Choi, while Jay Y Lee's main concern was to offer enough to satisfy Choi without it being so much as to draw public scrutiny, according to court documents.

The ensuing scandal shone a spotlight on the cozy relationship between chaebol like Samsung and the Blue House, Korea's equivalent to the White House. It provoked protests in the streets of Seoul, Jay Y Lee was arrested and president Park was impeached.

After serving a year in prison, Jay Y Lee was freed in February 2018 by an appellate court decision that halved his five-year sentence and suspended it. That's the decision the Supreme Court has struck down, and the Samsung leader now faces a months-long retrial and a potential return to jail.

The earlier trial also looked into the issue of equine bribery, with Samsung accused of trying to conceal its gift of a 1-billion-won horse by exchanging it for another animal -- effectively, laundering an equine. The prosecution presented a series of text messages, emails and memos among Jay Y Lee's lieutenants to support the allegation that Samsung originally gave the daughter of Park's confidante a horse for athletic competitions. Once media scrutiny began, Samsung agreed to replace it with another called Vladimir, they said.

Chief Justice Kim Myeong-su, reading out the 10-to-3 majority decision, ruled on Thursday that the lower court should have considered as possible bribes three horses --not just the one -- and other financial support provided to a sports education center controlled by Choi. Taken together, that would increase the alleged bribes that Samsung offered by 500 crore won to a total of more than 800 crore won. Under Korean law, any financial crimes above 500 crore won are subject to a minimum five-year sentence that cannot be suspended.

"People have a lack of trust in the judiciary, which is seen as lenient toward those with money and power but harsh on the poor," said Kim Nam-geun, a lawyer at People's Solidarity for Participation Democracy, a civic group based in Seoul. "This case should be a stepping stone to changing that perception."