Why Rs 21 Lakh Crore Package May Not Give Immediate Boost

Many observers are wondering how many of these steps are actually new or had been in the pipeline already. The government spent the past five days spelling out details of a Rs 21 lakh crore ($277 billion) virus-relief package, but many questions still remain.

Among the key measures outlined are: loan guarantees for small businesses, cheap credit to workers and farmers, tax breaks for service providers, increased foreign direct investment in defense manufacturing and a suspension of new insolvency proceedings for up to a year.

Many observers are wondering how many of these steps are actually new or had been in the pipeline already, and whether the measures would be able to cushion an economy on track for its first contraction in more than four decades. Here's a look at what economists are saying about this:

How much of this money is new spending?

Finance Minister Nirmala Sitharaman provided a breakdown of the package on Sunday that was equivalent to 10 per cent of gross domestic product.

However, economists say that much of this has already been budgeted for by the government and very little includes new spending.

“Only about 10 per cent of this stimulus can be traced as direct additional budgetary cost to the central exchequer,” said D.K. Srivastava, chief policy adviser at EY India. “Nearly 5 per cent of the stimulus relates to already budgeted expenditures.” Rahul Bajoria, an economist at Barclays Plc in Mumbai, said the measures include Rs 8 lakh crore of support already announced by the Reserve Bank of India. He estimates the actual fiscal impact on the budget will be only Rs 1.5 lakh crore, or 0.75 per cent of GDP.

What kind of a boost will the package provide?

The main focus of the government's measures is providing a $72 billion liquidity boost for small businesses, shadow banks and electricity distributors, as well as loan support for farmers. Small businesses are the bedrock of the $2.7 trillion economy, employing more than 110 million people.

Loan support helps to cushion the blow for businesses but won't boost consumer spending, a dilemma that many countries around the world are facing as job losses mount. The spending and reform measures proposed by the government are more geared to improve supply-side bottlenecks and support economic growth in the medium- to long-term. It doesn't provide citizens with a cash boost to spend.

“Providing financial support to keep units alive is good,” said Pronab Sen, program director with International Growth Centre and a former chief statistician of India. “That's necessary to begin with but that's only step one. Step two is demand support. If this is all they are going to give the demand support will not exist.”

What does this mean for economic growth?

The country's services industries, which make up more than half of GDP, weren't specifically targeted in the government's relief package. Businesses from airlines to hotels to entertainment centers will continue to struggle despite the financial support measures outlined. 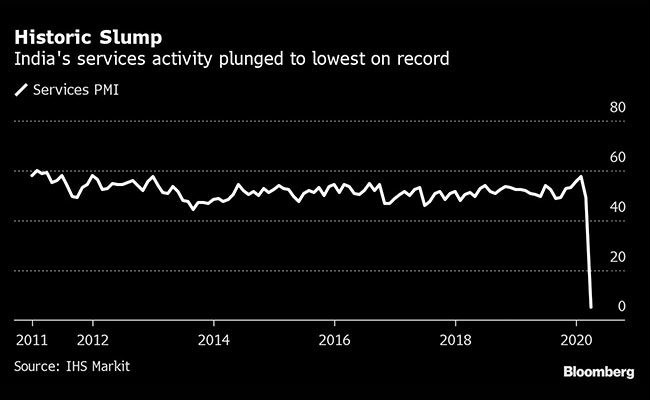 “The fiscal packages announced so far have stayed clear of sector-specific announcements that target the more vulnerable sectors, such as travel, tourism, hotels and restaurants,” Sonal Varma and Aurodeep Nandi, economists at Nomura Holdings Inc., wrote in a note.

Goldman Sachs Group Inc. economists said the structural reform measures announced by the government are more medium-term in nature and won't result in an immediate boost to growth. They see GDP contracting 5 per cent in the fiscal year through March 2021, which would be India's deepest recession ever.

A nationwide lockdown was extended for a third time through May 31, with some incremental easing of curbs to allow economic activity to resume. Companies are facing difficulties reopening factories though -- primarily because of travel restrictions, conflicting rules, broken supply chains and a shortage of workers.

With the fiscal package out of the way, the focus will once again shift to the central bank to provide support. The six-member monetary policy committee will likely cut interest rates again in early June. It's already lowered rates by 75 basis points this year and injected billions of dollars into the financial system through money market operations.