Why Indian economy is primed to boom now There is a perception within India that our economy is in shambles. High inflation, a low GDP, a weak currency, and a rising current account deficit (CAD) are some of the usual reasons that come up when one claims that Indian economy is not in a good state. However, I can prove it to you that because of the above reasons India is primed more than ever before to boom in the next 12 months?

Before we get to why India is primed for a boom in the near future, let us first look at its past performance. There is a perception among Indians that, since 2008, India has been in a "recession". Retail stock market participation has gone down; and generally you do not hear the words "booming" and "India" in the same sentence like you used to before 2008, when the global economic meltdown affected nearly every stock market in the world.

Here are 5 charts that show the major stock indices of the USA, India, China, Brazil, and Russia; the last four being the "BRIC" countries, all of which are deemed to be in similar stages of economic development over the past 5 years (from 3rd October, 2008 to 3rd October, 2013). 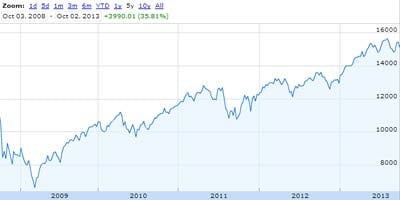 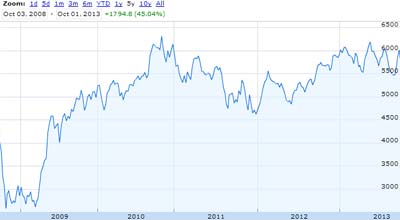 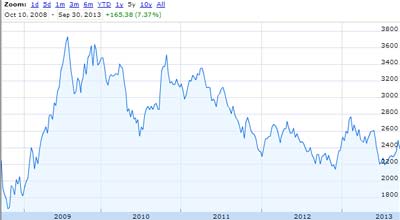 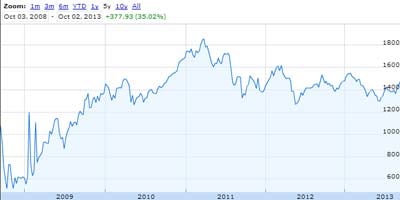 Lo and behold, India outperformed the US stock market and every single other major index from its BRIC counterparts. You were not expecting this, were you?

Here is the kicker: India was able to do this despite all economic indicators pointing towards the opposite direction. It is no secret that India's GDP, inflation, and current account deficit numbers indicate that the economy is not in a great shape. But if the Nifty was able to sustain weak economic conditions and outperform other major stock indices around the world, what is expected in the future?

Let us now focus on the present: where India stands today, and why the situation is only expected to improve in the near future.

Before we get to that, however, it is important for us to understand that inevitably, India and virtually every other country's economy is dependent upon the health of the American economy. The US dollar, due to being the Reserve Currency of the world, holds significant sway over the entire global economy. When the US economic system collapsed in 2008, it was no coincidence that India's economy took a drastic hit.

Therefore, it is important to compare India's economy to other economies in the world since all countries are invariably linked to America's economic status.

The Gross Domestic Product (GDP) is the sum of all products and services produced by a country. One of the best ways for India to bolster its GDP is to attract Foreign Direct Investments (FDI's). FDI's, inevitably, are linked to the health of the US economy- the more funds US investors have lying around, the more they invest into emerging economies like India.

Since we have already shown that India's stock market has outperformed the other BRIC countries' markets over the past 5 years, there is no reason why FDI's would hesitate to invest in India. Seeing how it is widely accepted that the US economy is finally recovering from its 5 year recession, FDI inflows will increase in the coming months.

Secondly, India's domestic economy has shown signs of growth. The IT sector, one of the pillars of India's economy that accounts for 25 per cent of India's exports, has surged this year; with the BSE IT Index having appreciated 38 per cent in 2013 so far.

Finally, we need to look no further than the International Monetary Fund (IMF) for affirmation that India's GDP is going to rebound. In its latest projections, the IMF predicts India's GDP to climb to 5.6 per cent for 2013-14. If the experts are projecting a GDP rise, why should we as Indians be pessimistic?

India's inflation level is at a dangerously high level. The RBI has repeatedly stated that its goal is to keep the Wholesale Price Inflation (WPI) below 5 per cent, yet the latest figures came in at 6.1 per cent. With new RBI Governor Raghuram Rajan having taken over the reins, it looks like the RBI will take all steps necessary to bring down inflation.

The RBI began to attack the inflation problem by raising the repo rate on 20th September from 7.25 per cent to 7.5 per cent, and economists are expecting further repo rate hikes. Interest rate hikes inevitably bring down inflation levels due to the fact that it limits the money supply of rupee available in the market. Needless to say, one issue that all can probably agree on is that inflation levels will likely be brought down in next months.

Last Monday, the Current Account Deficit (CAD) numbers for Q1 (April-June 2013) was released at $21.8 billion, or 4.9 per cent of GDP. India's current account deficit has exploded 1125 per cent since 2007, going from $8 billion to $90 billion; however, the government's goal for this financial year is to bring that number down to $70 billion and to 3.9 per cent of GDP. Since the IMF is expecting India's GDP to rise to 5.6 per cent, we could very well see a CAD of below $70 billion and significantly lower than 3.9 per cent of GDP if the IMF forecasts stay put.

Furthermore, as I stated in last week's column, India will not need to worry about the record high current account deficit (CAD) as much since the price that crude oil is imported at will be more predictable. The RBI is confident that India would be able to finance this year's CAD comfortably.

Now, we have reached a point where the American economy is picking up. All signs are pointing towards a new direction, one in which GDP will be bolstered, inflation will be kept under control, and the rupee will be stabilised. As a result markets would surge and go on a bullish run in the foreseeable future. Take advantage of this unique opportunity and invest wisely.

Raghu Kumar is the co-founder of RKSV, a broking company. The opinions expressed here are the personal opinions of the author. NDTV is not responsible for the accuracy, completeness, suitability or validity of any information given here. All information is provided on an as-is basis. The information, facts or opinions appearing on the blog do not reflect the views of NDTV and NDTV does not assume any responsibility or liability for the same.