What Does Rupee Plunging To 80 A Dollar Mean For You: Key Highlights

The rupee hit 80 per dollar for the first time ever on Tuesday; what does that mean for you?

Rupee falls to al an all-time low of 80 per dollar, what does that mean for you?

The rupee hit 80 per dollar for the first time ever on Tuesday, after breaching a series of all-time lows and weakening by over 7 per cent this year from about 74 at the start of 2022, tracking a rampant greenback.

What Does That Rapid Rupee Weakening Mean For You? Here Is Your 5-Point Key Highlights:

Higher Costs Of Imports: A weaker currency makes international purchases more expensive as you need to pay more rupees for the same product than you did previously. For example, if you were getting a foreign product for $1 in January, then you had to pay 74 rupees back then. But with the Indian currency weakening to 80 per dollar, you would not need to pay 80 rupees for the same product. The current trend suggests prices of foreign goods could rise further on expectations of more rupee weakening ahead.

Higher Fuel And Energy Prices: India imports over 80 per cent of its oil needs, and a weakening currency adds to the cost of international oil and energy products. That will result in higher fuel and energy prices for consumers in India as oil refineries and marketing companies pass on the additional exchange rate burden. Oil prices have risen 2 per cent because of global factors, but 6 per cent more because of rupee's decline. 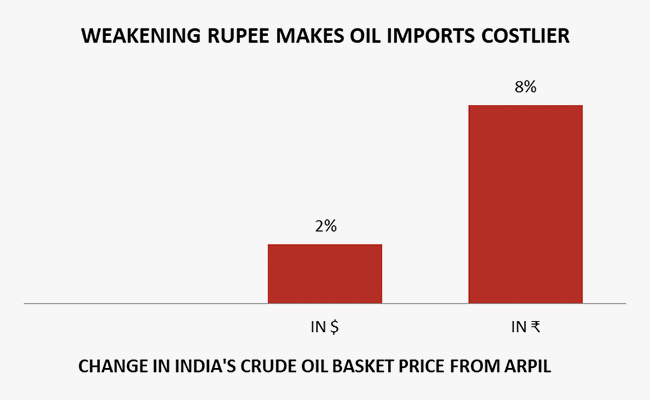 Higher Inflation: Should the INR depreciate by 5 per cent from the baseline (76 per dollar), inflation could edge up by around 20 bps while GDP growth could be higher by around 15 bps through increased net exports, according to the RBI April Monetary Policy Report. The rupee has depreciated by that much to 80 per dollar now. 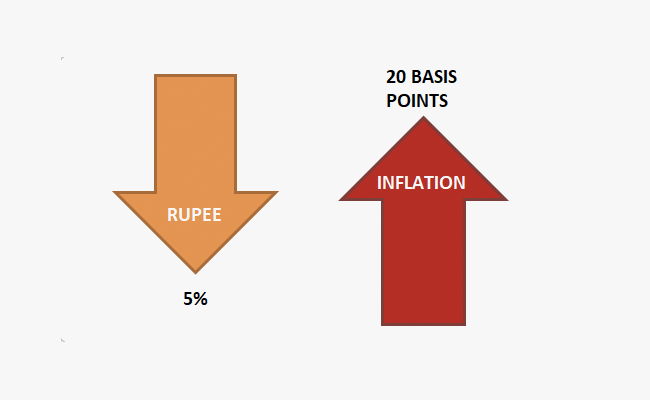 Pay More For Foreign Education And International Travel: A weakening currency will mean that you would now have to pay more for the same foreign education and international travel than you did before. For example, if the cost of travelling to an international country in January was $1,000, that translated into Rs 74,000 back then, but now you would have to pay Rs 80,000 for the same trip. The rupee has weakened by over 7 per cent this year against the dollar, suggesting US education and travel has become 7 per cent more expensive in just the last six months.

The Upside - Indian Exports Get More Desirable: A weakening currency helps exports and makes Indian goods competitive in international markets. Exporters who were getting Rs 74 in exchange for a product worth $1 would now get Rs 80 for the same.