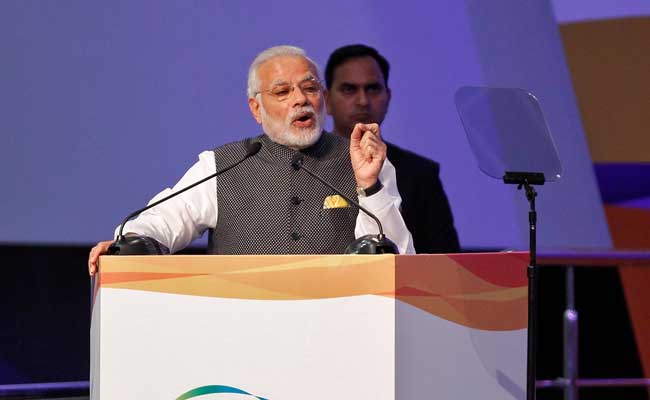 Mumbai/New Delhi: Prime Minister Narendra Modi said on Sunday that India should become an international diamond trading hub in addition to its present status as cutting and polishing hub.

Addressing the audience at a charity dinner at the International Diamond Conference in Mumbai through video conferencing, PM Modi said India has made rapid strides since the Gems and Jewellery Export Promotion Council of India was set up 50 years back.

He said: "India is now the world's largest manufacturer of cut and polished diamonds, and gems and jewellery sector is one of the leading sectors in India in terms of value of exports as well as employment generation."

PM Modi said India has emerged as the leader in diamond manufacturing and export in the last four decades and exports of gems and jewellery from India account for 15 per cent of India's total merchandise exports.

PM Modi said Indian importers had to go abroad to view and purchase rough diamonds till recently, which reduced the efficiency of the supply chain.

The Prime Minister said amendments have been made to the laws to enable rough diamonds to enter and exit, duty free for the purpose of viewing, and the Special Notified Zone at the Bharat Diamond Bourse, which became operational in November, 2015, has already shown good results.

PM Modi said only 80 to 90 big merchants used to get access to global rough diamonds by travelling to Belgium, Africa and Israel, and now about 3,000 small and medium merchants have this privilege through the new Special Notified Zone.

"Many of the most reputed international names in the diamond industry have conducted over 244 days of viewings. My intention is to make India, which is already the cutting and polishing hub, into an international diamond trading hub," he said.

"Our goal is to transform India in one generation. Since taking office, this government has placed emphasis on many transformative initiatives. 'Make in India' is one of them. Our aim is to make India a preferred destination for manufacturing," PM Modi added.

He said the gems and jewellery sector had accounted for 475 billion dollars of exports despite India having little diamond or gold production.

Referring to Skill India initiative of the government, PM Modi said it aims to ensure that new entrants to the work force have the necessary skills to contribute to the economy of the 21st century.

Referring to the presence of ministers from several African countries, PM Modi said India would support them in developing their gems and jewellery sector.

PM Modi said India's future is much bigger than cutting and polishing alone and there is a lot of unexplored potential.

He suggested documenting the legacy of India, which is of relevance to the jems and jewellery trade, and using it for designs.

He said diamonds are being used in spectacles, watches and pens. "Can't our jewellers, with their skills, strengths and heritage, create and change global tastes and fashions?"

The Prime Minister said that India has acquired a global brand for high skills and excellence in software but is yet to do that in jewellery.

PM Modi said: "The Council should consider taking a census of the lowest-paid and least prosperous persons in your industry. Can the industry ensure that every one of them is enrolled in the government's low cost social security schemes?"

Noting that India will celebrate the 75th anniversary of its Independence in 2022,PM Modi asked the gems and jewellery industry to set goals for itself.

Promoted
Listen to the latest songs, only on JioSaavn.com
He said the government can consider changes in regulations based on specific and practical suggestions.

(Except for the headline, this story has not been edited by NDTV staff and is published from a syndicated feed.)
Comments
Narendra ModiPM Narendra Modigems and jewellery sector in IndiaInternational Diamond Conference

J.P. Morgan Does Not Include India Government Bonds In Emerging Market Index