Finance Minister Nirmala Sitharaman has had to contend with weaker tax revenue as the economy slowed, and lower-than-expected income from assets sales. 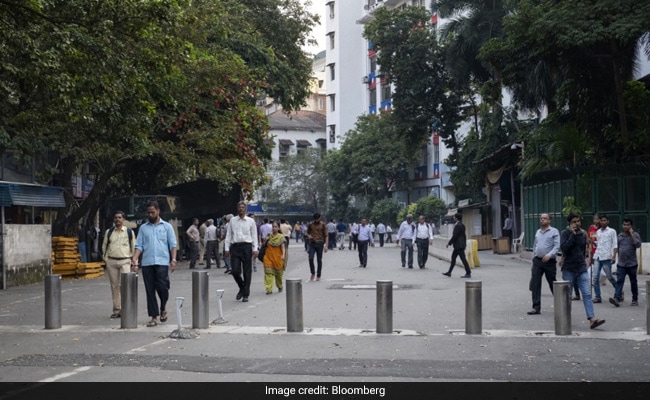 Finance Minister Nirmala Sitharaman is set to outline fiscal steps that may include higher spending in rural areas and possible tax cuts when she delivers her second budget speech in New Delhi. The government is expected to widen its budget deficit target for the year through March to 3.8 per cent of gross domestic product from a planned 3.3 per cent.

Ms Sitharaman has had to contend with weaker tax revenue as the economy slowed, and lower-than-expected income from assets sales. She may be forced to borrow more and tap the Reserve Bank of India for more dividends to help finance the budget.

Here are the key things to watch for in the budget to be presented in India's Parliament at 11 a.m.:

The government is set to miss its fiscal deficit target for a third straight year. Economists in a Bloomberg survey predict Ms Sitharaman will also widen next year's target to 3.5 per cent of GDP, even though a law on fiscal discipline mandates the government must narrow the shortfall to 3 per cent by then. 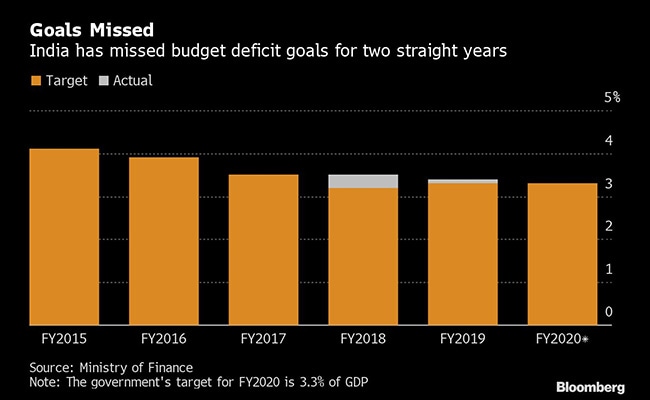 Ms Sitharaman may use a so-called 'escape clause' provided in the rules to widen the current year's goal by half a percentage point, and also amend the law to push the 3 per cent goal back by five years.

To invoke the escape clause, the government will need to cite exceptional circumstances, such as a war, a collapse in farm output, or when the economy is undergoing structural reforms with unanticipated fiscal implications. A. Prasanna, an economist at ICICI Securities Primary Dealership Ltd., said last year's corporate tax cut, entailing a $20 billion giveaway, may qualify as sufficient reason.

The government will probably boost borrowing to fund the wider fiscal deficit, with a Bloomberg News poll estimating likely bond sales of Rs 7.8 lakh crore ($109 billion) for the year starting April. That would be higher than Rs 7.1 lakh crore budgeted for the current year.

Fiscal hawks are warning against an expansion in spending they fear would push up yields and crowd out private investment. In our view, it is this sort of conservatism that is largely to blame for weak growth.

Investors are also speculating about rules that make it easier for companies to borrow overseas, amid a prolonged cash squeeze in the domestic market. The measures may include freeing up firms to borrow at higher rates and offering tax breaks to global funds.

The slowdown in the economy and the resultant tax concessions for companies to boost investments mean the government will probably miss the current year's Rs 16.5-lakh crore tax revenue target. ICICI Bank Ltd. estimates a shortfall of Rs 2.1 lakh crore in income from taxes. 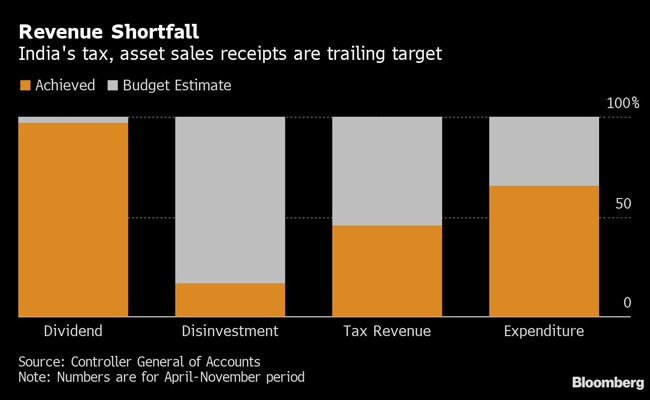 The government may pencil in higher income from the sale of state-owned companies next year, having fallen short of the current year's goal of Rs 1.05 lakh crore.

It may also have to turn to the central bank for additional revenue. The RBI pays dividends to the government every year. It allocated Rs 1.76 lakh crore last year, including Rs 52,640 crore from its surplus capital, and IDFC First Bank estimates it may pay around Rs 1 lakh crore in the year starting April.

Spending cuts on account of a revenue crunch was one way the government tried to keep the fiscal deficit from ballooning. Ms Sitharaman may make up for it by increasing public expenditure next fiscal year. Nomura Holdings Inc. expects increased spending in the rural sector, particularly around programs on jobs guarantees, affordable housing, health, education, and farm income.

Also under consideration is subsidized loans for mobile-phone manufacturers, as the government seeks to attract the suppliers to Apple Inc. and Samsung Electronics Co.

The budget may prioritize investment over short-term consumption demand, said Sonal Varma, an economist with Nomura in Singapore. "We expect the budget to be largely neutral for both growth and inflation."

Some analysts are predicting tax changes to help support businesses and consumers. Here are some possible changes: