Shares in the maker of Ben and Jerry's ice cream climbed four per cent on Thursday, after it joined rivals such as Nestle and Procter & Gamble in reporting strong sales of food and cleaning products 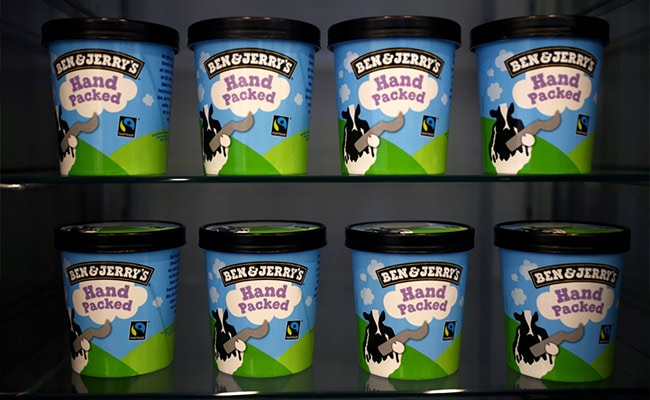 Ice creams of Ben & Jerry's - a Unilever brand, as displayed in a shop.

Unilever announced a 3 billion euro ($3.6 billion) share buyback and said it was confident of hitting sales targets this year, after demand from home cooks and China helped it to beat first-quarter sales expectations. Shares in the maker of Dove soap and Ben and Jerry's ice cream climbed as much as four per cent on Thursday, after it joined rivals such as Nestle and Procter & Gamble in reporting strong sales of food and cleaning products respectively in the pandemic.

Underlying sales jumped 5.7 per cent in the three months to the end of March, topping analysts' average forecast of 3.9 per cent, according to a company supplied consensus. "These are encouraging numbers," said Steve Clayton, portfolio manager of Hargreaves Lansdown's Select UK Shares funds. "Unilever gains much of its strength through the group's diversity."

The company said it was confident of delivering full-year underlying sales growth within its mid-term target range of 3-5 per cent, with the first half around the top of the range.

It also forecast a slight increase in underlying operating margin this year, despite double-digit inflation on some raw materials, such as soybean oil and tea. Like several rivals, Unilever said it would need to raise prices to mitigate the impact.

"Unilever price movement is typically in the 1-3 per cent range historically, and that is where we expect to be this year," Chief Executive Alan Jope told journalists, after the company raised prices by 1% in the first quarter.

Unilever, which makes about 60 per cent of revenues in emerging markets, said underlying sales growth there reached 9.4 per cent in the quarter, led by double-digit increases in China and India following strict lockdowns the previous year.

Pitkethly said easier comparables than last year, a return of sales to cafes and restaurants in places like China, and U.S. retailer restocking of high-end beauty products underpinned its confidence for the rest of the year.

Underlying sales in the group's food and refreshments business, whose brands include Hellmann's mayonnaise and Knorr soups, jumped 9.8 per cent in the quarter, helped by strong demand for home consumption in North America and Europe.

The company noted the devastating surge in COVID-19 infections sweeping India, another key market, but said it was not seeing any material impact on its business from that so far. "We're looking forward to continued growth in Q2," Jope said, pointing to the group's success in digitised ordering, increasing manufacturing capacity and bringing more inventory close to retail.

Unilever also said it was making good progress in separating its slower-growth Elida beauty and tea businesses, which could lead to sales or spin-offs. Elida beauty will consist of brands predominantly sold in Europe and North America, including Q-Tips, Caress, Tigi, Timotei, Impulse and MonSavon, which together generated revenues of around 600 million euros in 2020, the company said.

The moves are part of Jope's plan to jump-start growth, which has lagged peers in recent years, partly because of an outsized focus on emerging markets that have performed unevenly. In February, Jope said Unilever would focus more on high growth categories such as plant-based foods, beauty products and nutritional supplements, and aim to appeal more to younger consumers.

He said the priority was to grow existing businesses, rather than make acquisitions, but added on Thursday that the share buyback should not be seen as a lack of appetite for deals.