Wish Town was once a sought-after destination for India's aspiring middle classes seeking a slice of the "good days" promised by an ambitious Prime Minister Narendra Modi when he swept to power more than five years ago. Now, it's a symbol of lost hope.

A sprawling 1,063-acre property development located in Noida, just outside New Delhi, Wish Town was supposed to give would-be home buyers sparkling shopping malls, pristine golf courses and modern medical clinics. Apartments that should have been delivered by 2012 were billed in the media as "global homes with an Indian address."

Today the area is dotted with unfinished apartment blocks, abandoned part way through construction. Dilapidated buildings stand vacant, with overgrown bushes instead of manicured lawns. Most of the streets are empty of cars and people, aside from a few security guards. 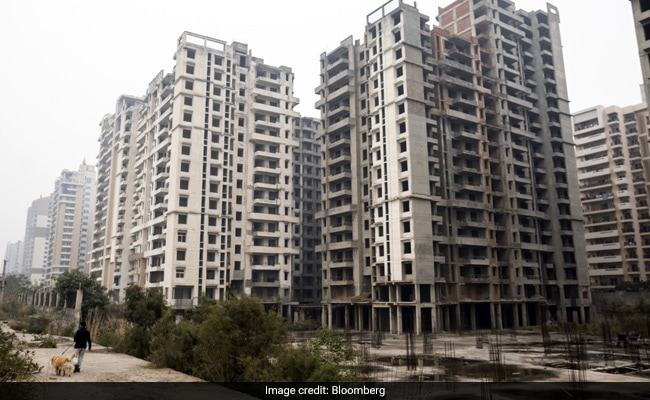 Wish Town's failure tells the story of an economy in distress, a banking system in pain and consumers too worried about job cuts and rising costs to spend. India's slumping consumption is so severe that it's denting global growth and prompting economists including last year's Nobel prize winner Abhijit Banerjee to warn of a "major recession" in the country.

The real estate market illustrates the extent of the economy's woes. Property developers like Wish Town's Jaypee Infratech Ltd. have gone bust, are mired in billions of dollars of debt and unable to secure funding to complete projects as promised. Non-bank financing, a $335 billion industry that became the lifeline for millions of small businesses and consumers in recent years, has dried up. Prospective home buyers are paying mortgages for apartments they can't live in, putting their budgets under strain. And millions of construction jobs are at risk, with effects that are already rippling across India's all-important rural economy.

From 8 per cent growth three years ago, the economy is set to expand just 5 per cent in the fiscal year through March, the weakest performance since 2009. The International Monetary Fund last week slashed India's growth forecast for this year by 1.2 percentage points to 5.8 per cent, specifically citing the nation as a reason for cutting its global growth outlook. Despite tentative signs that the worst may be over, growth isn't set to reach its previous highs anytime soon, never mind the 9-10 per cent pace the economy needs to combat extreme poverty in a nation of 1.3 billion people. PM Modi's goal of almost doubling the size of the economy to $5 trillion is becoming more distant and his 2014 promise that "good days are coming" no longer rings true.

To make matters worse for PM Modi, he's dealing with the biggest social upheaval since he came to power. Thousands of students and people from neighborhood groups have joined forces countrywide to protest a controversial citizenship law that critics say discriminates against Muslims and undermines India's secular roots. The fallout has dented PM Modi's image abroad and given some investors reason to rethink the 'India Rising' narrative.

At the heart of the economy's problems is a lingering credit slowdown, made worse by a crisis in the shadow banking industry nearly two years ago following the default by one of the nation's biggest infrastructure lenders. Shadow banks - lenders outside the regular financial system that aren't as tightly regulated as deposit-taking banks - had been responsible for millions of small loans on everything from cars to gold jewelry to luxury apartments over the years. The shock default caused credit markets to seize up in what some have called India's Lehman moment, a reference to the 2008 collapse of the Wall Street investment bank that triggered the global financial crisis.

As lenders choked off credit, domestic spending took a knock - and with consumption making up almost two-thirds of India's gross domestic product, it wasn't too long before growth numbers were hit.

In Wish Town, aspiring home buyers are curbing spending as they wait for construction to proceed. She forks out Rs 25,000 a month to rent an apartment while still paying off a mortgage of Rs 80,000 for a home in Wish Town that hasn't been built six years after she made the purchase.

"I was expecting my first child when we bought this property. Now I have delivered another one, but the house is nowhere in sight," Ms Addvant said from the balcony of her rented apartment, overlooking the half-built shell that was supposed to be her new home. She's cut back on shopping and traveling, and doesn't plan to replace her decade-old car.

A 10-minute drive from Ms Addvant's home in Wish Town brings you to a bustling intersection of hole-in-the-wall shops and street food carts, where about 1,000 laborers gather each morning in search of construction work that will pay less than $6 a day. Many are dressed in caps and sweaters not warm enough for New Delhi's plummeting winter temperatures this year of as low as 3 degrees Celsius. The workers stand for hours along the sidewalk hoping to get picked up by builders who need the extra hands that day. 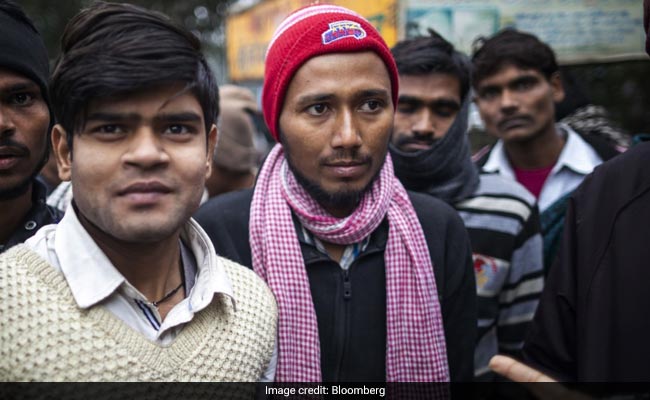 "Earlier, everyone would get work for about 25 days in a month, but now even five to 10 days is a lot," said Mr Kumar, who migrated to the national capital from Bihar.

To feed his two-month-old baby and already reeling from paying off loans from his relatives, Mr Kumar has taken a job as a night security guard. He's replaced breakfast with just a cup of tea and eats bread and salt instead of full meals. He hasn't bought clothes in a long time, has sold his wife's jewelry to make ends meet and looks for additional work during the day to survive.

The links between the construction industry and rural incomes are strong, which explains why consumption has been so badly affected, according to Pranjul Bhandari, chief India economist at HSBC Holdings in Mumbai. About two-thirds of India's population lives in rural areas and with limited incomes, many villagers flock to cities to find work and send money home to their families. Ms Bhandari estimates 70 per cent of rural people draw their income from activity outside of farming, especially in construction. 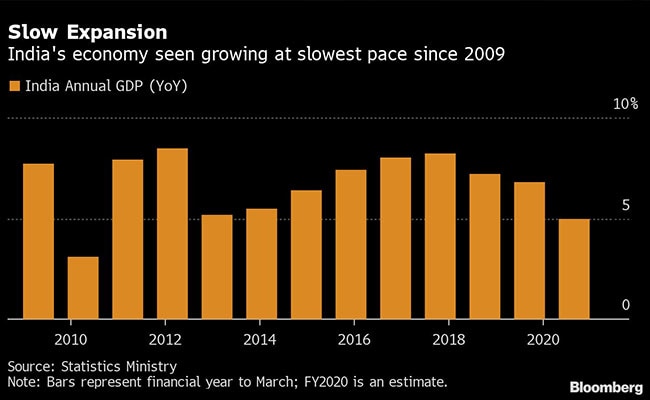 Having secured a bigger mandate in last year's election, PM Modi is now confronted with rising unemployment as layoffs spread across industries, from automakers to jewelers. The jobless rate - which the most recent official data puts at a four-decade high of 6.1 per cent in June 2018 - probably climbed to 7.85 per cent in the final three months of last year, according to the Centre for Monitoring Indian Economy.

Parth Mehta, managing director at Paradigm Realty, a Mumbai-based mid-size builder, said the company is scaling back on employment as the number of projects fell.

"The blood in the finance system has got completely choked and capital is difficult to come by," he said. "Lack of confidence, whether among buyers, developers and in general among corporates, is one of the key reasons for the intensifying slowdown. The shadow banking crisis was the final nail in the coffin." 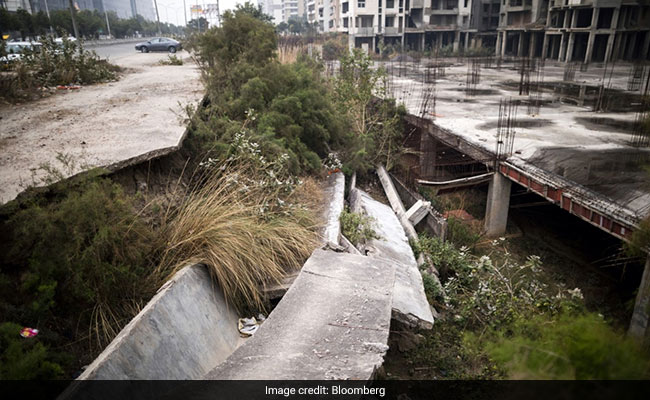 The government's response to the slowdown so far has been focused on boosting production in the economy, rather than stimulating demand. Finance Minister Nirmala Sitharaman gave companies $20 billion worth of tax cuts last year, set up a 250 billion-rupee fund to salvage stalled residential projects, merged weak state-run banks with stronger ones and eased foreign investment rules.

She is expected to outline more measures in her budget speech on February 1, with market watchers calling for increased spending in rural areas and tax cuts. A significant fiscal stimulus is unlikely though, given a slump in government revenue and a likely breach of this year's deficit target of 3.3 per cent of GDP.

"We believe that a coordinated fiscal and monetary boost is needed to lift the economy out of its current growth slump. In our view, tax cuts aimed at spurring private consumption and a boost in public capital expenditure would increase capacity utilization, avoiding any crowding out of private-sector firms." - Abhishek Gupta, India economist. 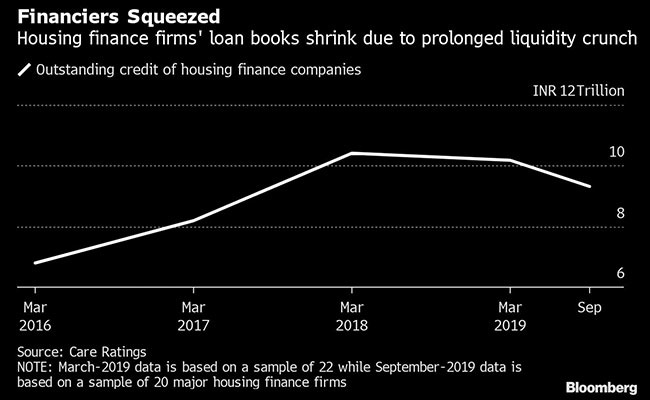 There's not much scope for Shaktikanta Das, governor of the Reserve Bank of India, to keep cutting interest rates too. Inflation exceeds 7 per cent, well above the bank's 2-6 per cent target, and given the credit problems in the financial system, the RBI's five rate cuts last year have done little to spur lending. Economists in a Bloomberg survey see 25 basis points of easing for the rest of this year.

"Lending to the real estate in India is still considered a nightmare by investors because of problems including the inability of many developers to finish projects and the demand slowdown," he said. "Funding for real estate has dried up. While it was a little difficult for the developers to get money before the shadow banking crisis, now it's very, very difficult."

Back in Wish Town, a state-owned company has been selected to complete construction of the outstanding apartments over the next four years. But home buyers such as Manish Choudhary, a senior executive with an information technology company, remain bitter about their circumstances.

"We can't plan vacation and buy even normal stuff. I would have sent my child to a better school if the mortgage and rent wasn't there," said Mr Choudhary. "The slowdown has hit the class which is paying taxes."