Shareholders of a publicly-listed firm have a vested interest in knowing how the company performed during the quarter; after all, their money is on the line! Potential investors also have a vested interest. Is it the right time to buy, or should the investor wait until the company shows more consistent financials? Investors are usually looking to buy and hold shares for the long haul, so before placing any money on the line they want to ensure that they have done their homework thoroughly.

But what about active traders who are used to getting in and out of trades quickly? They don't care much about a company's long term potential; they just want to make some quick money. Is it actually possible for there to be a way to take advantage of an earnings report to generate some quick, short-term profits?

The answer is a strong, resounding yes.

Take a good look at the above graph of Mahindra & Mahindra Financial Services. It is a one day, intraday graph for the 22nd of January. From market open (9:15am) through approximately 2:15pm, the stock's price hovered around 270.

And then the stock's price fell.

What caused the fall? By now, you could have probably guessed the answer. Right around 2:15pm, the company reported its earnings results. The key financials that the market usually looks at are earnings per share (EPS) and net profit. Analysts polled in advance had expected M&M Financials to report a net profit of approximately Rs. 240 crore on a year to year basis, but the actual number came in much lower at Rs. 164 crore. The market did not hesitate to sell the stock, and by the end of the day the price had fallen from 270 to 253. After the news soaked in overnight, the market sold the stock heavily on the 23rd as well, with the stock's price closing at 239.9.

On the 22nd alone, if an acute trader had sold the stock at 270 and bought it back at 253 at the end of the trading day, he would have earned a profit of (17/270) = 6.2 per cent return on investment. That is an absolutely incredible return on investment on a trade within one day.

And if there is any doubt that traders not investors, were the ones that caused that massive drop in price, the following table should put those doubts to rest. 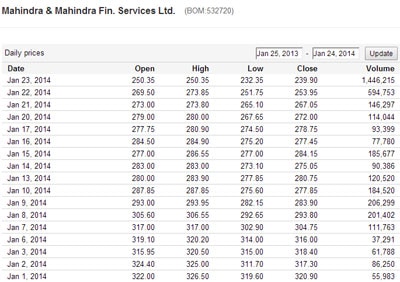 As you can clearly see, the volume spiked up on the 22nd and 23rd. Incredibly 1.4 million shares were exchanged on the 23rd, while the average from January 1st through January 21st was approximately only 100,000. Clearly traders were getting in and out of trades and exchanging shares furiously.

So the question remains: how does one exactly go about earning from earnings reports?

Speed is the name of the game

Similar to trading economic news releases (see my post here on how to trade news releases), one needs to ensure that they get their news in a timely fashion. Subscribing to real-time news outlets like Bloomberg, Reuters, or wire agencies like PTI (Press Trust of India) or Business Wire India is the best bang for the buck.

By doing so, you would get real-time RSS feeds with the latest breaking news, including relevant earnings reports and their associated financials.

The idea is to the get the news as soon as possible. Otherwise, you can try to stay up to date through live TV and the internet, but there is a chance that you will get the information in a delayed format.

Here is a step by step guide to trading earnings reports:

In conclusion, since this is the earnings season, don't hesitate to employ this strategy. Using small quantities and a conservative risk management approach, you can slowly build confidence.

After all, what good is it to study an earnings report if you're not earning from it?