The court said that entertaining post-dated cheques dated November 11 would "tantamount to travesty of justice". 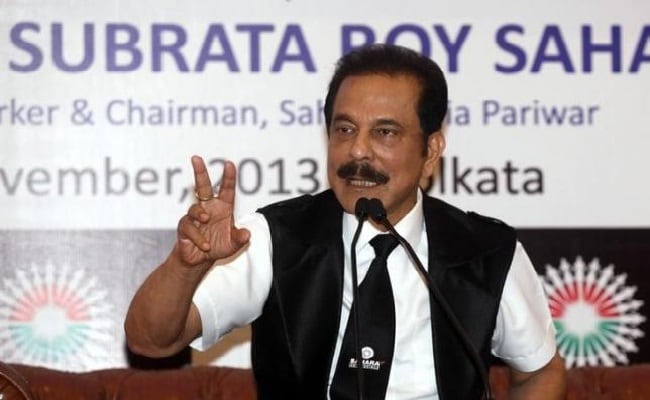 The "drama of procrastination" must stop, said senior advocates appearing for SEBI.

Sahara’s Subrata Roy is walking on tight rope. Monday brought further trouble for Mr Roy, who is out on parole since last year, as the Supreme Court refused to stay the auction of his township Aamby Valley in Maharashtra. However, later on, one of the lawyers of the embattled group said that the a Dubai investment fund had agreed to provide a loan of $1.6 billion (over Rs 10,000 crore) against security of 26 per cent shares of its Aamby Valley project. The following are the 10 key points that will help you decode all that has happened in the high-profile case so far:

1) The Supreme Court refused to stop the auction of Sahara’s property Aamby Valley in Maharashtra.  During the hearing, senior advocate Kapil Sibal, appearing for Mr Roy, said that the auction process should be put on hold till September so that his client could arrange Rs. 1,500 crore to be deposited into Sebi-Sahara account but the court rejected his plea.

2) The top court also refused to give two months extension to Mr Roy to deposit Rs 966.80 crore of the remaining Rs 1500 crore, saying he was trying to treat the apex court as "a laboratory" to play with the law.

3) The apex court directed the official liquidator to go ahead with the scheduled auction of the group's Aamby Valley property in Lonavala valued at Rs 37,392 crore, as it rejected Mr Roy's plea to extend the time till November 11.

4) The top court said that barring "hyperbolic arguments and rhetoric statements" by the Sahara chief, the amount in its entirety has not yet been paid.

5) However, a Sahara group lawyer later said in a statement, "Royale Partners Investment Fund Limited of Dubai, headed by HE Sultan Al Ahbabi has entered into an agreement with Sahara to provide loan of $1.6 Billion against the security of 26 per cent of the shares of Aamby Valley Ltd.5) "

6) The court said that entertaining post-dated cheques dated November 11 would "tantamount to travesty of justice" and "extending unwarranted sympathy to a person who is indubitably an abuser of the process of law". A bench of Chief Justice Dipak Misra said "he, who thinks or for that matter harbours the notion that he can play with law, is under wrong impression".

7) It directed that the auction process of the Aamby Valley should be held on October 10-11 at Mumbai as per the direction and schedule approved by the court. The court also asked the official liquidator to carry out the auction as per procedure and during the auction, the Registrar General of the Bombay High Court, designated as a Supreme Court appointee, shall remain personally present to oversee the auction at the venue.

8) The bench said the contempt proceedings in the case have had a chequered history and it was due to the "ingenious brainchild" of the Sahara chief. "Many an order came to be passed in the contempt proceedings due to the recalcitrant proclivity of the respondent-contemnor who possibly has harboured an adroit idea that he can test the patience of this Court. It has been said long back that patience itself has its own patience and is not without limitations. The purpose of saying so relates to liberty granted on number of occasions to the respondent-contemnor, Subrata Roy, to pay the amount by depositing the same in SEBI-Sahara account," the bench said.,” it said.

Promoted
Listen to the latest songs, only on JioSaavn.com
9) Senior advocates Arvind P Datar and Pratap Venugopal, appearing for SEBI, said the auction has to proceed and the "drama of procrastination" must stop.

10) The court also rejected senior advocate Mr  Sibal's submission that the contemnor has paid the substantial amount of Rs Rs 16,000 crore till now and only about Rs 8651 crore remained to be paid and it should not be held against him. During the hearing, Mr Sibal said that Mr Roy had made tremendous efforts to comply with the order of Court and if the prayer made by him is not accepted, the principle of reasonableness would be defeated. (With Agency Inputs)