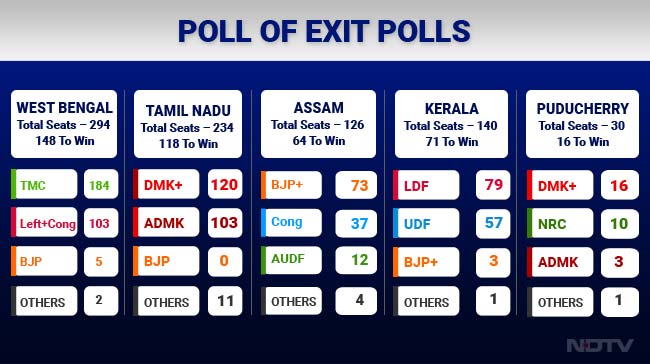 The poll of exit polls shows the DMK-Congress combine leading in Tamil Nadu.

According to NDTV's poll of exit polls, Chief Minister J Jayalalithaa is down to 103 seats, while the DMK and Congress coalition is ahead at 120 seats in Tamil Nadu. The alliance is headed by M Karunanidhi, who is 93, and has said he plans to serve as Chief Minister.

Expectations of strong performance in the March quarter is also driving Sun TV, which is on track to notch its fifth straight gain today, analysts said.

"If you look at Sun TV's business model, a large part of revenue comes from south India, both in terms of advertisement revenue market share and subscription share... Zee Entertainment's Q4 is a precedent for Sun TV. Markets are pre-empting strong numbers, which has led to the up move in stock prices," Mr Joshi told NDTV Profit.

Market expert Sarvendra Srivastava told NDTV Profit that Sun TV could hit levels of Rs 540 to Rs 560 if it breaks above the resistance zone of Rs 435 to Rs 437.

Sun TV shares closed 9.88 per cent higher at Rs 433 on the National Stock Exchange. The stock outperformed the broader Nifty, which ended with 0.38 per cent gains.