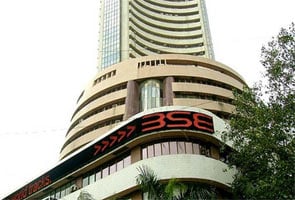 02.45 p.m. Sarvendra says another 7-8 per cent gains are possible in Punjab National Bank, SBI and Bank of Baroda (in order of preference). Private banks may see some correction. If rupee breaks 60 per dollar, large cap IT stocks may correct 6-8 per cent.

02.40 p.m. Phani Shekhar of Angel Broking says long term investors should start buying state-run banks, maybe on dips after 2-3 months and depending on the new dispensation in New Delhi. SBI is the best bet among PSU lenders. It is proxy to entire banking sector and has good asset quality as compared to its large and midcap PSU peers.

Cement stocks also seeing traction today. Ultratech up 3.8 per cent, Grasim Industries rises 3 per cent and ACC up 2.85 per cent. Ambuja Cements up 2.5 per cent. Among the losers, HDFC down 1.4 per cent, Cairn India down 1.2 per cent. HUL  and JSPL also traded with over 1 per cent losses.

Large cap IT stocks have given up gains and are now trading lower. (Track top gainers and losers)

1:38 p.m. Broader indices Sensex and Nifty back into positive again. Except FMCG index, all sectoral indices are trading with gains.(Track markets)

11:59 a.m. NSE's Midcap index is up around one per cent against Nifty's 0.2 per cent gain. Union Bank is the major gainer in the NSE's midcap index and trading with a gain of 7.25 per cent.

11.05 a.m. Markets are choppy today, possibly on account of some profit taking after a record rally. Sensex up 20 points at 22,234, Nifty up 15 points at 6,657. PSU lenders continue to trade with strong gains. On the Nifty, Ultratech Cement, up 3.75 per cent, has replaced PNB as the top gainer. (Track markets)

10.12 a.m. IT stocks on track for first gains in six sessions. HCL Technologies up 2.2 per cent, Infosys is up 0.7 per cent and Tata Consultancy Services gained 0.6 per cent. (Read what has changed the sentiment)

09.24 a.m. Banking stocks, especially PSU banks, leading the rally for a second straight day. CNX PSU Bank index is trading up 3.3 per cent as against a 1.1 per cent rise in the Bank Nifty. Among other sectors, realty stocks also seeing good buying interest.

Top Nifty losers include JSPL, down 1 per cent, ITC, down 0.7 per cent.

09.10 a.m.Market outlook: Most analysts NDTV spoke to said investors should book partial profits after the sharp run up.

Gaurang Shah of Geojit BNP Paribas says it's prudent to take money home especially in PSU banks. State-run banks have jumped on the back of Basel norms getting postponed by one year, but asset quality concerns for these lenders have not gone away completely. Oriental Bank of Commerce and Canara Bank are good names to short.

Deven Choksey, managing director at K R Choksey Securities says profit-booking cannot be ruled out at these levels, but it remains a buy on dips market due to flows and macro improvement.

Sarvendra Srivastava says Nifty is trading close to target range of 6,700-6,800, while the Bank Nifty has met the target range. Gradual profit taking around the next two sessions advised, he said. Nifty reversals at 6,544.

08.30 a.m. Stocks to watch include Tech Mahindra and United Spirits, which have become a part of the Nifty index from today. Jaiprakash Associates and Ranbaxy Laboratories have moved out of Nifty. United Spirits shares have gained 12.35 per cent since February 28, when the National Stock Exchange (NSE) announced the changes to its bluechip index. (Read the full story here)

08.15 a.m. Indian stock markets are trading at record highs on the back of huge liquidity. Foreign investors bought shares worth Rs 2,192 crore on Thursday, while DIIs sold shares worth Rs 592 crore.

Besides the Reserve Bank of India's policy review on April 1, where it is widely expected to keeps rates unchanged, investors say the forthcoming general elections would act as the next key catalyst for markets.