Watching the business news first thing is a new routine for 12-year-old South Korean Kwon Joon, as he dreams of becoming the next Warren Buffett 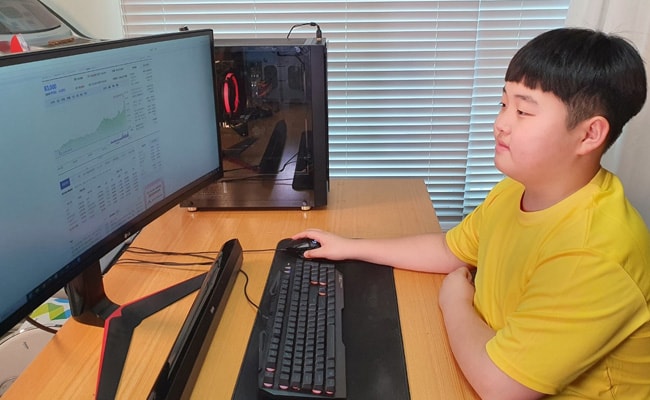 Watching the business news first thing is a new routine for 12-year-old South Korean Kwon Joon, as he dreams of becoming the next Warren Buffett after earning stellar returns of 43 per cent from a hobby picked up just last year: buying stocks. Mr Kwon pestered his mother to open a retail trading account last April with savings of 25 million won ($22,400) as seed money, just as the benchmark KOSPI index began recovering from its biggest dip in a decade."

I really talked my parents into it, because I believed an expert who was saying (on TV) that this is a once-in-a-decade opportunity," said Mr Kwon, who rode the steepest jump by year-end among MSCI's country indexes.."My role model is Warren Buffett," he added, in a reference to the U.S billionaire investor."Rather than short-term focused day trading, I want to keep my investment for 10 to 20 years with a long-term perspective, hopefully to maximize my returns."

South Korea's rookie investors like Mr Kwon, who pursues "value investing" in blue chip shares with funds garnered from gifts, trading mini-car toys and running vending machines, have led the blistering rise of retail trade amid the coronavirus pandemic. More retail investors are teenagers or even younger, making up more than two-thirds of the total value traded in the nation's shares, versus less than 50 per cent in 2019.

The trend has grown as equity markets lure parents disillusioned with the education system and millennials working from home."I wonder, in this day and age, whether a college degree would be all that important," said Kwon's mother, Lee Eun-joo, who fuelled his passion by looking to expose him to business rather than tuition, seen as key to getting ahead in academics."Because we live in a different world now, it could be better to become an 'only-one' kind of person," added Lee, who feared even a good schooling might not arm her son against dwindling job opportunities.

About 70per cent of the 214,800 stock brokerage accounts for minors at Kiwoom Securities, South Korea's most retail-friendly brokerage, with a market share of more than a fifth, were set up in January 2020 or after, its data shows.

Mr Kwon, with time on his hands during last year's school closures for the pandemic, drew up a wish list of purchases, which he made during market corrections. These ranged from South Korea's largest messenger app operator Kakao Corp., to the world's biggest memory chip maker Samsung Electronics Co., and Hyundai Motor.

Mr Kwon's success also reflects the employment challenges for young South Koreans, despite being among the most highly educated cohort in the OECD club of advanced nations. Data on Wednesday showed the unemployment rate for young Koreans aged between 15 and 29 jumped to a fresh record of 27.2 per cent in January, as jobs were vanishing at the fastest pace in two decades amid curbs to contain the coronavirus. Three-quarters go on to college after high school, versus the grouping's 44.5 per cent average, but finding rewarding, creative work is tough.

"There aren't enough jobs for college graduates, so many are opting out to diversify their career path early," said vocational researcher Min Sook-weon. That is something Mr Kwon understands.

"Rather than going to good schools like the Seoul National University, I'd rather become a big investor," he said.

"I also hope to do a lot of charity work."