Share Market on Monday: The Nifty PSU Bank - the index of state-run banks - advanced over 7 per cent as all of its 12 stocks gained. 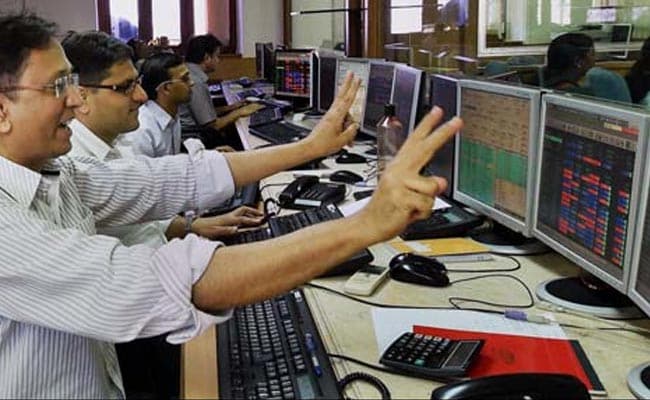 Stock Market on Monday: Forty two out of 50 Nifty stocks traded with gains.

Bonds, rupee and stock markets all gained as they took their lead from the Reserve Bank of India's announcement that it will buy Rs 40,000 crore of government bonds via open-market operations in November as it seeks to inject liquidity into the market.

Forty two out of 50 Nifty stocks traded with gains.

ICICI Bank led the advances - up over 10 per cent - on both the benchmarks, after it reported a better bad loan ratio in the quarter that ended September as compared to the April-June period. The net profit, however, fell 56 per cent to Rs 909 crore.

"ICICI's results stood out, and money is moving there, which is much cheaper than Kotak and HDFC," Naveen Kulkarni, Head of Research at Reliance Securities, was quoted as saying in a report by news agency Reuters. "ICICI, which has been lagging the other two banks, could now be playing catch-up."

Technical experts said that the markets may trade in a tight range. "The recent vertical wave towards south has been halted near the psychological level of 10,000-mark. The major threshold for bulls is placed near 10,250. So we are of the opinion that the Nifty may trade in a tight range of 10,000-10,250. So rather than going for a directional view, one should go for stock-specific action," said Dyaneshwar Padwal, AVP Technical Analyst, KIFS Trade Capital.

Meanwhile, the 10-year benchmark bond yield fell to 7.80 per cent, its lowest since August 14 and compared with 7.88 per cent on Friday. The rupee rose as much as 73.32 to the dollar compared to Friday's close of 73.46, reported Reuters.

RBI May Be Forced To Hike Rates Sooner As March Inflation Spikes To 6.95%