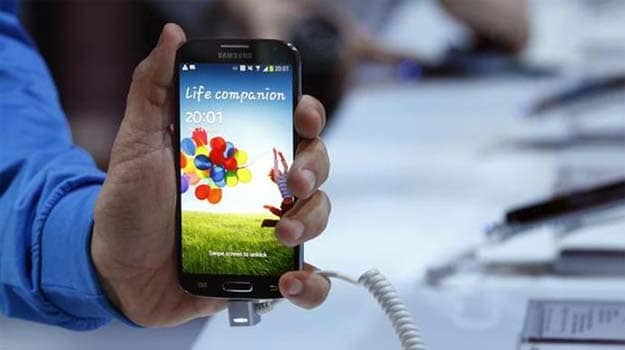 Samsung's newest, feature-packed Galaxy S4 may put pressure on Apple Inc to accelerate its pace of smartphone design and venture into cheaper devices - both departures from usual practice.

The latest Galaxy, unwrapped with much fanfare in New York on Thursday, out-does the iPhone in most technical aspects. But the challenges it encapsulates run deeper than just a simple specifications comparison.

"It would be overstatement to say Apple is far behind," Charles Golvin, analyst with Forrester, said, but it does need to note the quickening pace of competitive devices being released.

"If anything, what Apple needs to respond to is the cadence of their own releases, probably a completely new design every two years and a sort of speed bump every year is not an adequate cadence for Apple to remain at the forefront of smartphone innovation today."

Samsung's apparent ability to go toe-to-toe with Apple on cutting-edge smartphones may prompt the U.S. titan to finally make its own assault on the lower-end of the market that it has famously stayed away from -- not least to get into untapped markets like China and India.

Many analysts now say Apple has to respond in force to Samsung and other rivals that are grabbing attention. Much of Wall Street is now looking ahead to the next iPhone, but expectations are muted.

Once the darling of Wall Street, Apple has, in six months, seen its shares fall 30 per cent from a high of $705. Its Maps software was panned for inaccuracies; its once-reliable financial results, that rarely failed to surpass Wall Street estimates, missed analysts' expectations.

Apple appears stuck in an iPhone product cycle, with a new phone typically launched in the second half. In past years, the iPhone has gotten a complete redesign only every two years.

Brian White, analyst with Topeka Capital Markets, who views the Samsung Galaxy S4 as a refresh and "not a game changer," said smartphone technology is now improving so fast that timetables put Apple at a disadvantage.

More importantly, White said, Apple needs to broaden its portfolio and play in more smartphone categories as the high-end market could soon be saturated, and get into new categories such as the oft-rumored television or a smart watch.

"They have all the components of the magic potion, which is the hardware-software ecosystem," he said. "All they need to do is take that potion and put it in a different segment of the iPhone market."

While many on Wall Street believe the quickest way to penetrate fast-growing markets like India and China is a cheaper iPhone, the risk is that a cheap iPhone would cannibalize demand for the premium version and eat into Apple's peerless margins.

Apple's vice-like grip on its ecosystem - with the closely managed app store and its seamless integration with the hardware - is still seen as its biggest strength, one that Samsung is trying to emulate with a larger investment in software and connectivity. The Korean giant is also emphasizing its own mobile "Samsung Hub" rather than the Google Play store that most other Android adopters point to.

Samsung's rapid rise is partly helped by the fact that it bombards the market with close to 40 versions tweaked for regional and consumer tastes, from high-end to cheaper models.

Samsung's momentum is a major issue for Apple, Ben Reitzes, analyst with Barclays, who is expecting Apple to launch a lower-end iPhone globally this summer.

Apple declined to comment on Friday. But a day before Samsung's launch, marketing chief Phil Schiller attacked Google's Android operating system, saying that the majority of its users were stuck on older versions. He also said Apple's internal research showed four times as many consumers were switching to iOS from Android than vice versa.