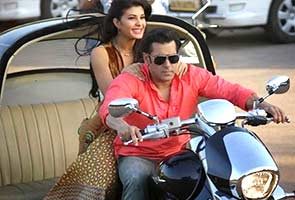 Salman Khan-starrer Kick got a big boost from the Eid holiday, taking its collection to over Rs 120 crore in five days, trade analyst Taran Adarsh said in a tweet.

This makes Kick the biggest Bollywood grosser so far in 2014, according to Mr Adarsh.

Kick also worked its magic in international markets. In its first five days, it grossed over Rs 33 crore in overseas markets, Trade analyst Taran Adarsh said in a tweet.

Kick also marks the directorial debut of Sajid Nadiadwala. Kick is a remake of the hit 2009 Telegu film of the same name and the screenplay for the Hindi version was adapted by Chetan Bhagat and Sajid Nadiadwala, who's also the director-producer of the movie. The film has been released under the Nadiadwala Grandson Entertainment banner.

Also starring Jacqueline Fernandez, Randeep Hooda, and Nawazuddin Siddiqui, the action thriller was released across 5,000 screens in India and as well as 42 other countries. (With Agency Inputs)