The RBI doesn't seem to be in a mood to give the currency a free run even as most of its regional peers have rebounded from the virus-induced selloff.

The rupee is Asia's worst performer over the past three months

India's foreign-exchange reserves are at a record and approaching the $500 billion mark, and yet, the rupee is Asia's worst performer over the past three months.

That's because the Reserve Bank of India doesn't seem to be in a mood to give the currency a free run even as most of its regional peers have rebounded from the virus-induced selloff. Indonesia's rupiah, the rupee's high-yielding counterpart, is leading the gains.

Analysts say the central bank is adding to reserves to guard against a likely downgrade in the country's credit rating or to ensure a bigger transfer of surplus to the revenue-starved government. The RBI likely bought about $9 billion in the forex market in the four weeks ended May 29, according to Bloomberg Economics, pushing up reserves to a record $493.5 billion. 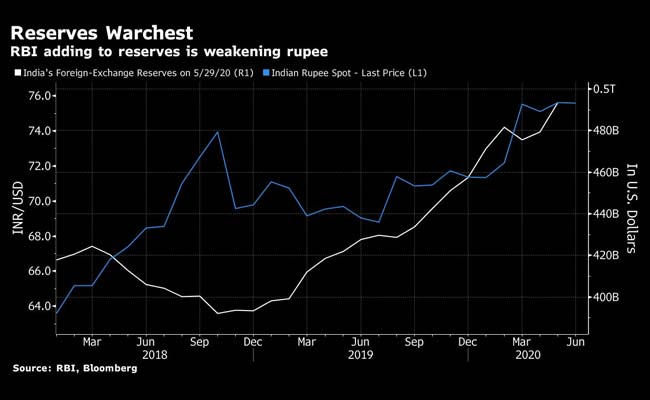 "The rupee is unable to do it, in spite of the surge in capital inflows, due to the dollar buying spree from the central bank," said Anindya Banerjee, currency strategist at Kotak Securities Ltd. The mop up is sign that the RBI sees the inflows as temporary and prone to reversal if growth fails to pick up, he said.

The rupee has lost 2 per cent in the past three months, having hit a record low of 76.9088 per dollar in April. It closed little changed at 75.5950 on Wednesday.

India's equity markets have seen foreigners step up purchases, unfazed by Moody's Investors Service's downgrade of the nation's rating last week. They've poured $2.7 billion into stocks so far in June, the most among big Asian markets, on expectations that the economy may recover faster than expected as the government gradually lifts the world's biggest lockdown.

Separately, Reliance Industries Ltd. has strung together deals worth $13 billion for its Jio unit, and a series of share sales including a $1 billion offering by Kotak Mahindra Bank are expected to boost inflows, helping add to the country's reserves.

The monetary authority doesn't comment on its day-to-day intervention and has repeatedly said it steps in only to curb undue swings in the currency. Yogesh Dayal, a spokesman for the RBI, did not immediately respond to an email seeking comments on intervention in the market.

While Kotak's Mr Banerjee expects the RBI to "maintain the run rate" in mopping up dollars, Abhishek Goenka, chief executive at India Forex Advisors Pvt., said the central bank is building a buffer to shield the economy from a cut in ratings and a spike in bad loans at lenders after the pandemic halted economic activity.

On June 1, Moody's cut the nation's rating to the lowest investment grade, putting it on par with S&P Global Ratings and Fitch Ratings at a level above high-yield. Some strategists, including UBS Group AG, expect S&P and Fitch to change their outlook to negative from stable over the next couple of months.

There's speculation that the RBI may deliberately let the rupee weaken till end-June to bolster its balance sheet, which will enable it to transfer a bigger slice of its realized profit as dividend to the government, Mr Goenka said.