Since the formation of government, foreign portfolio investors have sold shares worth Rs 28,260.50 crore.

Investors' wealth worth Rs 12.5 lakh crore has been wiped out in the first 100 days since the second term of Prime Minister Narendra Modi's government started on May 30. At yesterday's closing, the market capitalisation or market value of companies listed on BSE stood Rs 1,41,15,316.39 crore as against market capitalisation of Rs 1,53,62,936.40 crore a day before PM Modi's government came to power.

Slowing economic growth, along with outflow of foreign funds and weak corporate earnings, are some of the reasons for the slump in equity markets, say analysts.

Foreign investors have been net sellers in the Indian markets. The pressure to sell increased after Finance Minister Nirmala Sitharaman introduced the super-rich tax on foreign investors in the first Budget of second NDA government, which was rolled back a month later.

"The slowdown in the markets started way before the Prime Minister Modi's second term in power. The introduction of long term capital gains tax and dividend distribution tax in February 2018 budget led to the start of fall in equity market valuations and the slump in markets accelerated in the aftermath of the IL&FS crisis," AK Prabhakar, head of research at IDBI Capital, told NDTV.

"A lot of mid- and small-cap companies have corrected big and are at reasonable valuations. IL&FS crisis had a cascading effect on markets and the things are likely to recover from here on," added Mr Prabhakar.

All sector gauges compiled by National Stock Exchange except the Nifty Information Technology index have given negative returns over the last 100 days, with Nifty PSU Bank index dropping 26 per cent. Last month, the government announced mega mergers of state-run banks in which number of government-owned banks will be reduced to 12. 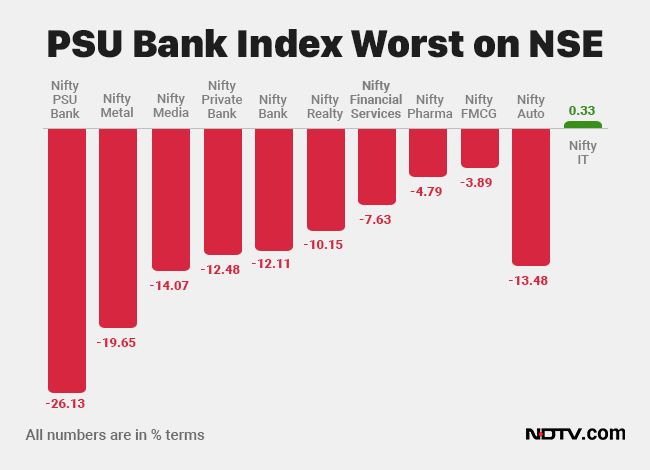 Metal index dropped 20 per cent in the wake of increased trade frictions between US and China. Analysts say despite the anti-dumping duty, China is selling cheap steel which is hurting the domestic metal companies.

Nifty Auto index has slumped 13.48 per cent as auto industry faces its worst slowdown in two decades. "We saw massive rise in autos in the last five years so the slowdown is also visible now. We never saw runaway sales in four wheelers. The way Maruti Suzuki has grown in the last 5 years has been amazing," Mr Prabhakar said.

Markets Likely To Have A Cautious Start