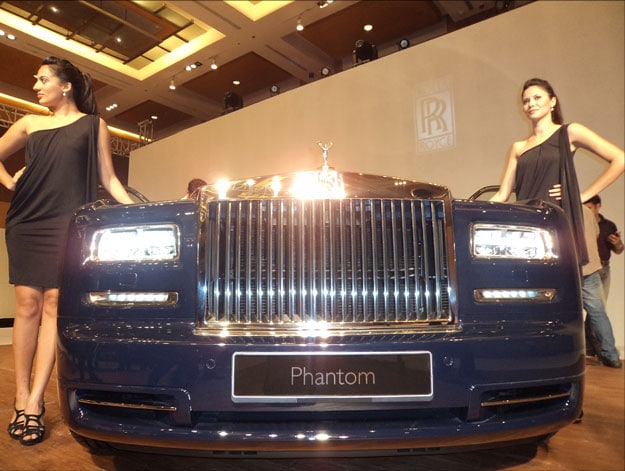 This was the very first time that a Rolls-Royce was presented in India.

Among the new features that have been included in the Series II are new LED headlamps, a new grille made out of a single unit of stainless steel and a total redesign of the front and rear bumpers.

The coupe variant will be available in eight-nine months, and will be followed by the convertible, called the Drophead Coupe, said Sharad Kachalia, director, sales and marketing, Navnit Motors, the sole Rolls-Royce dealer in Mumbai.

Rolls-Royce is one of the few manufacturers in the world to feature full-LED light clusters as standard across its Phantom range.

“The suspension has been enhanced for India, which will give additional comfort,” Mr Kachalia said.

Mr Kachalia also let NDTV Profit in on a marketing secret, which he called “whisper marketing”.

“We send the car to the customer's place without knowing him…take his family for lunch or dinner. This kind of very small gathering of about 5-10 couples…we take them to a dinner place and give them a test ride, show them the car. These activities are quite successful,” he said.

“We are currently expanding. Some…we are already at a certain stage. We will announce another expansion soon, closer to Mumbai, closer to Maharashtra, and possibly in Maharashtra as well, and also in the south,” he added.

While Mr. Hasenoehrl  declined to give sales figures in India, he said “2010-11 saw a massive increase in volume. This was a record year, the best in history. And this year, we expect yet another record. And of course, if you are expecting a record worldwide, each and every market we are represented in, will also have to contribute to that”.