Introduced in January, the trading platform allows shareholders to sell their rights entitlement to others interested in subscribing to the share sale.

Reliance's rights offers one share for every 15 held in the company at Rs 1,257 apiece.

Reliance Industries, which popularized equities as an investment in the world's second-most populous nation, is now the first to test a trading avenue in India with its record $7 billion rights issue.

Introduced in January, the trading platform allows shareholders to sell their rights entitlement to others interested in subscribing to the share sale. Reliance's rights entitlement began trading on May 20 at Rs 151.15 -- the difference between the closing price of Rs 1,408.2 on May 19 and the rights price of Rs 1,257 -- and settled at Rs 181.6 on Tuesday on the National Stock Exchange. 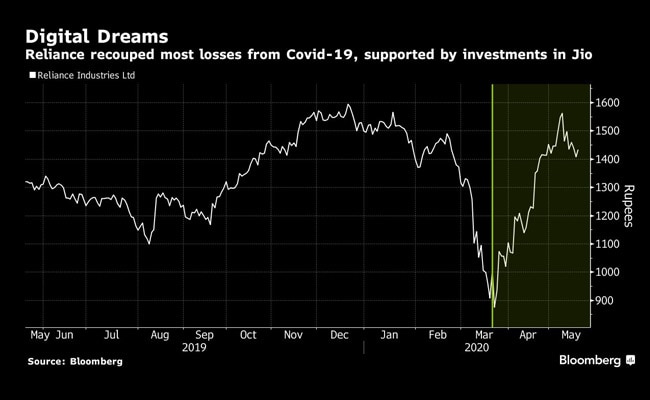 Reliance recouped most losses from Covid-19, supported by investments in Jio.

"This is the perfect start to the platform because you're seeing the excitement on both the buying and the selling side," said Sameer Kalra, a strategist at Mumbai-based Target Investing. "The progress of this platform will depend on more large-cap companies coming forward and using it."

The rights issue of the firm controlled by Mukesh Ambani is attracting new investors after it raked in $10 billion of investments into digital services unit Jio by selling stakes to companies including Facebook Inc. Asia's richest tycoon is steering the conglomerate into newer consumer businesses, and the fund raising gives investors a chance to bet on him pulling off the transformation.

French bank Societe Generale SA's unit picked up 3.3 million of Reliance's rights entitlements at Rs 182 on May 20, according to data from the NSE. As many as 29 million securities traded that day, surpassing the number of Reliance shares that changed hands, the data show. Volumes have since ebbed and totaled 15.12 million on Tuesday. The entitlements can be traded until May 29.

Reliance's rights issue to its 2.3 million shareholders offers one share for every 15 held in the company at Rs 1,257 apiece. The stock fell 0.5 per cent to close at Rs 1,424 on Tuesday.

"Now, there is more clarity for investors as Jio will be separate from retail and petrochem businesses," said Umesh Mehta, head of research at Samco Securities in Mumbai. "The sum of the parts will be greater than the current holding company structure. This will be a good opportunity for investors from a five-year perspective."