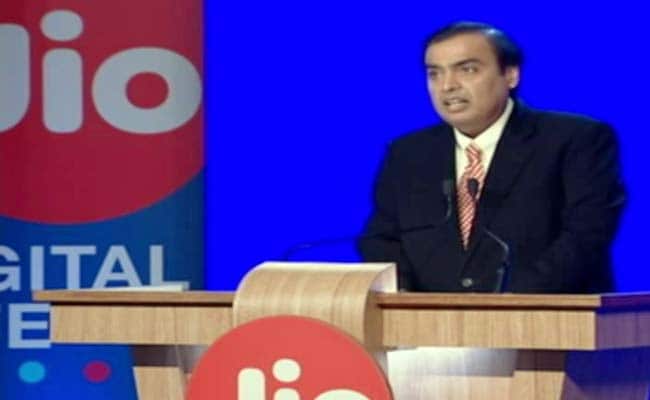 Mr Ambani said the Prime offer will open for enrolment on March 1 and close on March 31.

Jio will start charging customers from April 1, but will offer sharply discounted prices for a year to those who sign up by the end of March under its Prime offer, Reliance Industries chairman and managing director Mukesh Ambani said today. The Prime offer will open for enrolment on March 1 and close on March 31, Mr Ambani said. Under Jio's Happy New Year offer, customers currently enjoy free data and voice services till March 31, 2017. To enrol for the Prime offer, under which customers will continue to get unlimited benefits till March 31, 2018, existing and new subscribers of Jio (till March 31, 2017) will have to pay a one-time fee of Rs 99.

Mr Ambani also announced that the subscriber base of Jio has touched 100 million in just 170 days of its launch.

He also said that on all of Jio's tariff plans, to be applicable from April 1, all domestic voice calls to any network will always remain free. Mr Ambani also said Jio's plans will offer better value for the best price, referring to the competition. Jio will match the highest selling tariff of other operators and provide 20 per cent more data than what other operators provide, he said.

Promoted
Listen to the latest songs, only on JioSaavn.com
Jio will double its data capacity in the coming months which will help it expand its network reach, said Mr Ambani. "And we are making our network better, faster and stronger with each passing day. In the coming months, we will more than double our data capacity and this means even better quality for our customers," he said, adding that by end-2017, Jio network will be present in nearly all the cities, towns and villages of India, covering 99 per cent of population.

Jio launched its trial services on September 5, 2016 and since then the company has been offering free voice and data services to its customers. Rival companies like Airtel have accused Jio of offering predatory pricing and have raised the matter with fair trade regulator CCI (Competition Commission of India) as well as telecom regulator TRAI (Telecom Regulatory Authority of India).