Mukesh Ambani's Jio May Control 45% Of Market By 2022: India Ratings

India's three big wireless carriers have been locked in a brutal price war. 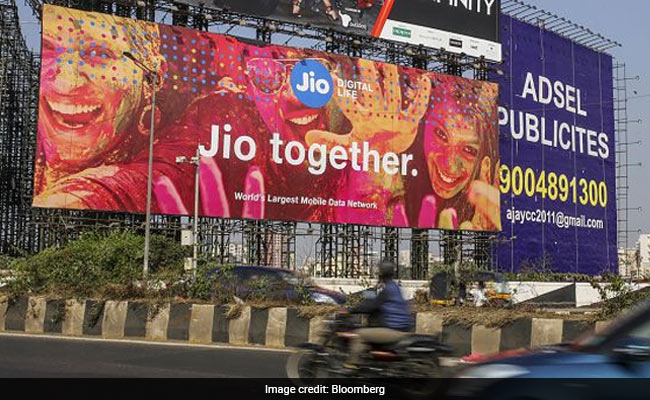 Jio has been offering data tariffs as much as 30% lower than competitors, according to India Ratings

The wireless carrier controlled by billionaire Mukesh Ambani will probably keep drawing users away from rivals, reaching a market share of as much as 45 per cent by fiscal year 2022, from 30 per cent as of March, a unit of Fitch Group said.

Reliance Jio Infocomm Ltd., which has been offering data tariffs that are as much as 30 per cent lower than competitors, is in a position to take advantage of intensifying competition, the unit, India Ratings and Research, said Thursday in its mid-year outlook for telecommunications.

India's three big wireless carriers have been locked in a brutal price war, leading to mounting debts for the companies and declines in subscribers for Bharti Airtel Ltd. and Vodafone Idea Ltd. The companies' elevated debt levels and reliance on capital infusions for debt servicing and expenditures prompted India Ratings to maintain its negative outlook for the industry, it said in the report.

Mr Ambani stormed into the industry in 2016 and has bet his carrier can outlast rivals while offering some of the lowest prices for services and handsets.

Bharti Airtel and Vodafone idea will probably see their slice of the market drop to between 25 per cent and 27 per cent, according to the outlook, India Ratings predicted.

The government has said it may seek to raise $84 billion from a sale of airwaves, including some to be used for 5G services. Plans for the auction have raised concern that carriers will have to borrow even more to pay for building the new network.

Any incremental capital expenditure toward spectrum or 5G technology will derail the fragile recovery and be negative for ratings, according to the India Ratings report by Prashant Tarwadi, a director.