The sharp decline in growth had many analysts assuming the RBI will deliver a rate cut on Thursday. 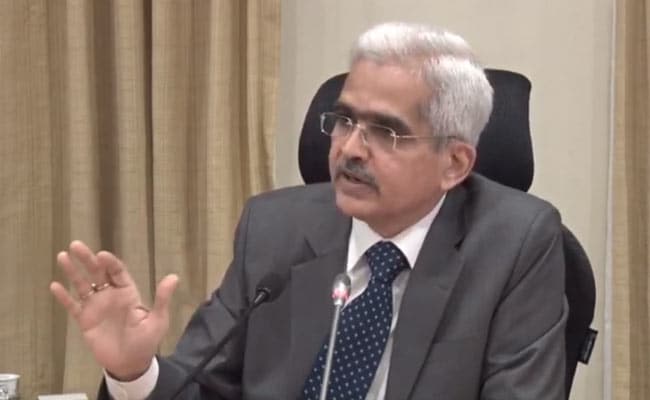 After surprisingly holding the key lending rates, Reserve Bank of India (RBI) Governor Shaktikanta Das said on Thursday the central bank cannot "mechanically" keep cutting interest rates every time but hinted at resuming the easing cycle after Budget and analysing the impact of past rate cuts on the economy. The remarks from the RBI chief came as the central bank kept the repo rate unchanged at 5.15 per cent while maintaining an "accommodative" stance. The RBI however trimmed its economic growth forecast sharply to 5 per cent for the current financial year, from 6.1 per cent.

Analysts were expecting Mr Das to go for the sixth straight policy reduction by at least 25 bps followed by a pause in the February review.

"You must cut when the impact would be maximum; the timing is also very important rather than going on mechanically cutting the rates on every occasion," Mr Das said explaining the rationale behind the surprise pause.

Mr Das was quick to add that the MPC continues to be accommodative as long as it is necessary to revive growth, while ensuring that inflation remains within the target.

The decision to hit the pause button was unanimous by the six-member rate-setting committee, Mr Das told reporters at the customary post-policy presser.

The RBI Governor said the central bank will wait for the impact of the coordinated measures taken by the government and the RBI over the past few months to push growth to play out before taking a call on rates.

"We have seen some green shoots emerging but it is too premature and assume how sustainable they are," and that the BBI and government continue to work in a coordinated manner to achieve the larger objective of reviving growth.

The MPC decided to pause and see the outcomes of the government steps in the past four-five months and also the impact of the five rate cuts by the central bank since February, the RBI Governor said.

"We should allow some more time for the combined impact of the measures taken by the government and the consistent monetary easing by the RBI so far, for their full impact to unfold and play out," he added.

The RBI's latest growth estimate for the year ending March 2020 stands a full 110 bps lower compared with 6.1 per cent in October, and 190 points from the estimate of 6.9 per cent in August.

Official data last month showed growth fell to a more than six-year low of 4.5 per cent in the second quarter of current financial year.

Mr Das also pointed towards a line in the monetary policy committee resolution, which makes it "explicitly" clear that there is a scope for further rate cuts.

The MPC decided that it is better take a temporary pause and wait for better clarity on all these fronts during the February meeting, he added.

On whether hitting the pause button was due to the fears on the governor missing the fiscal targets, Mr Das said there is no worry on fiscal deficit front. Further action on the rate front will also depend on the Budget, he said.

"I am not saying we are worried about fiscal numbers (being breached), but we''d just like to have greater clarity with regard to the kind and the nature of the counter-cyclical fiscal or any other measures that government may announce in the budget. It will give us greater clarity," Mr Das explained.

The MPC projected a sharp spike in headline inflation estimates to 4.7-5.1 per cent in the second half of current and 4-3-4.8 per cent in the first half of next fiscal year.

"Our calculation is that in the fourth quarter, food inflation is likely to remain very high and any moderation in the coming months depends on several factors," Mr Das said.

The RBI expects core inflation to remain in the current zone - below 4 per cent - but warned that the steep hike in telecom tariffs may have adverse impact on core inflation.

After chiding banks all these months for not cutting their lending rates, Mr Das said the monetary transmission process has been full and reasonably swift across various money market segments and the private corporate bond market.

He also expressed hope that the rate transmission may gather speed going forward as banks have linked lending rates to the repo rate.