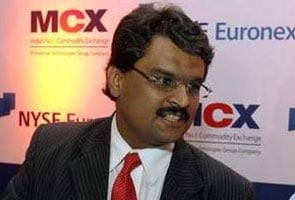 Financial Technologies India Ltd (FTIL) chief Jignesh Shah on Wednesday said his company's plan to reduce stake in Multi Commodity Exchange (MCX) to 2 per cent from 26 per cent will not be impacted due to the PwC report on related parties' transactions at the commodity exchange.

Mr Shah defended the transaction agreements between MCX and its erstwhile promoter FTIL and questioned the timing of the release of the PwC report when the divestment process is underway.

"The divestment process will not be derailed because of the PwC report. There is no set back to the process," Mr Shah told a news channel.

"Bidders will see the PwC report now and will get back to us. They wanted to see this report and speak to the management of MCX. I hope they will cooperate," he said.

"The shortlisted bidders are all matured local and global corporate houses to understand implications of the PwC report, if any, in which MCX by itself disclaims any responsibility towards any person keeping reliance on the content on the report and states that it neither agrees nor disagrees with the contents," Mr Shah said in a statement.

"We will continue our honest efforts to divest 24 per cent stake in MCX... We hope to complete the divestment in next few days without prejudiced to our rights, pending before the court."

FTIL has to reduce to its stake in MCX as the commodity markets regulator FMC has declared it as "not fit and proper" to hold more than 2 per cent stake in the bourse in the wake of a Rs 5,500-crore payment crisis at the group firm National Spot Exchange Ltd (NSEL).

The regulator FMC-appointed PriceWaterhouseCoopers (PwC) that audited the books of MCX alleged that the commodity bourse entered into agreements with related trading parties and paid about Rs 709 crore to FTIL and group firms without following proper documentation process.

On the PwC report, Mr Shah said, "Natural justice is being denied to FTIL as neither PwC nor MCX has shared the special audit report, neither it has taken views."

The report is "highly motivated and based on surmises and hearsay", he said, adding, "It is a malicious attempt to derail transparent sale process of MCX share held by FTIL."

Promoted
Listen to the latest songs, only on JioSaavn.com
"It is being put up to defame FTIL and cause losses to shareholders of FTIL and MCX. Also, the previous auditors - Deloitte, KPMG were not consulted," he added.

On allegation leveled in the PwC report that FTIL signed one-sided agreements with MCX, Mr Shah said, "The transaction agreements between the two companies are transparent and have been vetted by law firms... The two institutes have executed the agreements, their Boards have cleared it and now PwC has commented and let it pass the legal process."