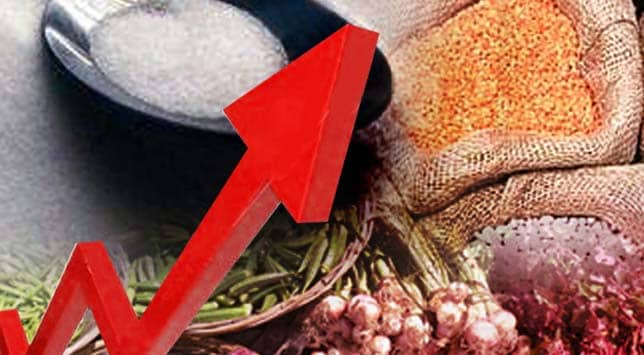 India’s headline inflation, measured by the wholesale price index (WPI), rose to 7.23 per cent from 6.9 per cent in March 2012. Experts had projected WPI to drop to 6.7 per cent. Food inflation was at 10.5 per cent. The higher-than-expected inflation has reduced the prospects of further interest rate cuts. (Read: What experts say)

The surge in inflation is now adding to the RBI's struggle to control inflation when economic growth has slumped to a near three-year low. “Today's number underscores the point that the Reserve Bank of India has limited room to cut monetary policy rates because it highlights the risks that inflation poses,” said Leif Eskesen, chief economist for India and Asean, HSBC, Singapore. “The inflation is more structural in nature, and if the RBI eases rates too much, inflation could flare up.” (Read More)

The BSE Sensex and NSE Nifty, which traded up 0.5 per cent in the early morning trade, slumped as soon as the inflation data was released. The street was betting on a low inflation for April 2012. A spike in global risk aversion too dented sentiment.

The BSE Sensex closed down 0.47 per cent or 77 points to 16,215.84. The NSE Nifty slipped below 4900-level shedding 21 points or 0.43 per cent. It ended the day at 4,907.80. Market heavyweight Reliance Industries also traded close to its 52-week low at Rs 681 (-2.32 per cent) as investors are concerned about declining profit growth in core businesses of refining and petrochemicals. (Read More)

Also read: Why is the Street bullish on Bajaj Auto

3) Rupee at all-time closing low, slumps to 53.97 against dollar

The rupee on Monday closed at a new provisional record closing low of 53.9750 to the dollar as global risk aversion spiked and as higher-than-expected domestic inflation data hit stocks by lowering expectations for future rate cuts. (Also read: Why the rupee is among the weakest currencies)

The rupee came very close to falling below the psychologically key 54-level and ended not far from the record low of 54.30 hit in mid-December. (Read More)

The reason for the downgrade was similar to LIC's -- the significant direct exposure each of the banks has to Indian government securities. (Read More)

Larsen & Toubro, the biggest Indian engineering and construction company, reported a net profit of Rs 1,920 crore over net sales of Rs 18,481 crore for the quarter ended March 2012. While the net profit was higher than the Street estimates, net sales were lower. (Read More)

Three top executives involved with a failed hedging strategy that cost JPMorgan Chase & Co at least $2 billion and tarnished its reputation are expected to leave the bank this week, sources close to the matter said on Sunday. (Read More)

JPMorgan Chase & Co lost at least $2 billion in its failed hedging strategy not only because it was sloppy, but because it grew too big in a small market of complex financial instruments and couldn’t offload its holdings. (Read: The core problems with JPMorgan’s failed trades)

Also Read: JPMorgan sparks question: How much is $2 billion?

Japanese two-wheeler giant Yamaha on Monday said it will set up a third facility in India, entailing an investment of Rs 1,500 crore over the next five years.

The company's wholly owned subsidiary—India Yamaha Motor—will start the production of this new plant near Chennai by 2014 with an initial annual capacity of 4 lakh units, which will be expanded to 18 lakh units by 2018. (Read More)

8) Yahoo CEO steps down amid controversy

Yahoo Inc is replacing its CEO for the third time in as many years, and giving three board seats to a hedge fund led by Daniel Loeb, putting him in a strong position to influence strategy at the struggling Internet company.

Chief Executive Scott Thompson stepped down on Sunday, 10 days after Loeb accused him of padding his biography by faking a computer science degree. Loeb's Third Point LLC is one of Yahoo's largest shareholders with a 5.8 per cent stake. (Read More)

The government has approved the appointment of commerce secretary Rahul Khullar as the chairman of the Telecom Regulatory Authority of India (Trai). Khullar will succeed J.S. Sarma, whose tenure ended on Sunday. (Read More)

Meanwhile, the telecom regulator has reaffirmed most of its proposed rules for an auction of mobile airwaves, including a steep base price for bids, despite howls of protests by carriers in the world's second-biggest mobile phone market. (Read More)

Facebook's chief executive turns 28 on Monday, setting in motion the social network's biggest week ever. The company is expected to start selling stock to the public for the first time and begin trading on the Nasdaq Stock Market on Friday. The IPO could value Facebook at nearly $100 billion, making it worth more than such iconic companies as Disney, Ford and Kraft Foods.

At 28, Zuckerberg is exactly half the age of the average S&P 500 CEO, according to executive search firm Spencer Stuart. (Read More)

Maruti Suzuki To Increase Prices In September; Stock Zooms Over 2%