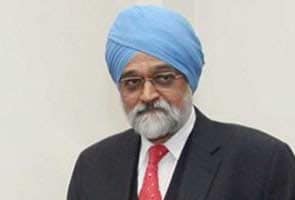 Planning Commission Deputy Chairman Montek Singh Ahluwalia has resigned while the other members are in the process of putting in their papers.

Mr Ahluwalia submitted his resignation to the Prime Minister Manmohan Singh after the Union Cabinet meeting held in Delhi.

Another member of the Planning Commission B K Chaturvedi also submitted his resignation.

"Deputy Chairman has put in his papers. I don't know about the other members but I have resigned as Member of the Planning Commission this morning," Mr Chaturvedi told PTI on Saturday.

As per the practice, all members of the commission submit their resignations to the Prime Minister, who is the head of the institution after the general elections.

The term of members of the Planning Commission is coterminus with the government.

Following general elections results on Friday, the new BJP-led government is expected to be formed next week.

The new government will decide on the reconstitution of the Planning Commission.

This Planning Commission has drafted the 12th Five Year Plan (2012-17), which envisages an annual average economic growth of 8 per cent during the policy period.

Promoted
Listen to the latest songs, only on JioSaavn.com
However, economic growth was recorded at 4.5 per cent in the first year of 12th Plan. It is estimated to be 4.9 per cent in 2013-14, the second year of the policy period.

India's economic growth is expected be 5.5 per cent during this fiscal year.