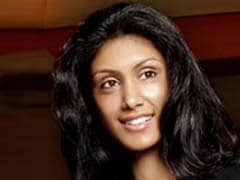 As chief executive officer and executive director of HCL Corporation, Roshni Nadar Malhotra is responsible for strategic decisions of the $6.3-billion company founded by her father Shiv Nadar.

Being the only child of Mr Nadar, who according to Forbes list is India's ninth richest person with a personal fortune of $8.6 billion as of October 2013, she is destined to inherit the business empire that includes India's two prominent IT firms.

Ms Malhotra, however, is in no hurry to get involved in the core business of the group and day-to-day operations of group companies. Philanthropy is at the top of her priorities now, and it would remain so in the future as well, she tells.

When asked whether she is ready to step into her father's role, she replied firmly, "No."

"My focus is HCL Corporation and Shiv Nadar Foundation. These two are so big. First have to make sure you do enough justice to your role before you take more in your plate."

Ms Malhotra, 32, joined HCL Corporation and Shiv Nadar Foundation, the philanthropic arm of the group, in 2009.

As per Forbes rich list released recently, Shiv Nadar is India's ninth richest person with a personal fortune of $8.6 billion as of October 2013. Mr Nadar, 68, has indicated in the past that baton of the empire would be passed on to the daughter as and when he retires.

Ms Malhotra, an alumnus of the US-based Kellogg Graduate School of Management, said her family targets to invest Rs.6,000 crore, or around $1 billion, in various philanthropic initiatives under the Shiv Nadar Foundation.

Set up in 1994, Shiv Nadar Foundation has invested Rs.1,801 crore till March 2013. Additional Rs.3,000 crore is committed for the next five years, she said. It released its first-ever annual report earlier this week giving details on how it has spent the money and its future plans.

Ms Malhotra, who is a trustee of the foundation, said the reason behind the release of annual report is to ensure transparency and accountability in the functioning.

"Our aim is to set some kind of benchmark and standards for transparency and governance in private philanthropy."

She said there is a need for setting up some sort of regulatory body in India in line with some Western countries like the UK to ensure transparency in the functioning of charity and philanthropic institutions.

VidyaGyan schools have expanded their outreach to nearly 200,000 children in 75 districts of Uttar Pradesh, India's most populous state.

As a representative of the Foundation, she was involved in a joint initiative with the Rajiv Gandhi Foundation to promote education of Dalit and Muslim girls in backward districts of Uttar Pradesh.