In Mumbai's prime business district of Lower Parel, plans are underway to transform and decongest the streetscape for a safer urban ecosystem. 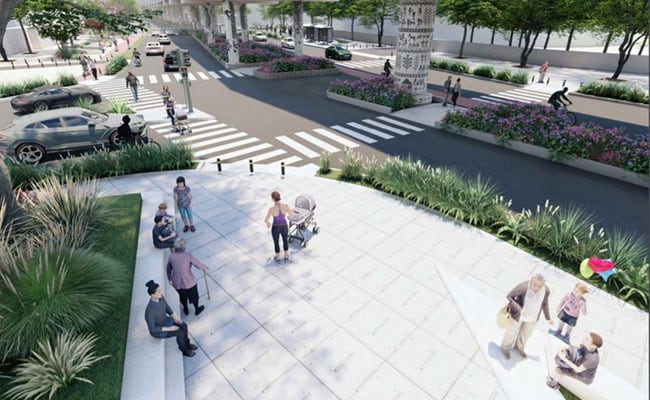 Nestled by the Arabian Sea and forever bustling in the cacophony of traffic jams, Mumbai – is the city of dreams, yet never sleeps! Being the country's financial capital, the city's infrastructure holds immense importance considering rapid urbanisation and industrialisation. Apart from its vada pavs and cutting chai, Mumbai is also popular for its ailing roads and traffic snarls. Potholes, sinkholes, and narrow lanes continue to plague the city's mobility. These issues have not just affected the urban infrastructure but have also claimed lives in unfortunate accidents. However, in Mumbai's prime business district of Lower Parel, plans are underway to transform and decongest the streetscape for a safer urban ecosystem.

Nucleus Office Parks – a leading real estate player based in Mumbai, is implementing an infrastructural project in the Lower Parel in order to redevelop the existing area in the central business district. As part of the transformation, pedestrian pathways will be built and a community space will be created in the area for residents. Pedestrian pathways will create a segregation from the main roads which witness higher traffic, especially during office hours. The pathways will be safer for residents to walk in the area, especially to cross busy roads during the peak morning and evening hours.

The mile-long stretch of the road at the junction between Dadar, Elphinstone, and Lower Parel in Mumbai's central business district is a high-volume traffic area, registering a footfall of more than one lakh commuters per day.

Several areas in Mumbai lack open spaces due to which traffic snarls are a common problem, plaguing the city's movement. During peak hours, traffic jams on highways brings the city to a standstill. Solving these challenges, not just requires a new infrastructure model, but also a sustainable approach. Building complete streets, streamlining vehicle lanes, and creating safe pedestrian walkways will ensure that commuting becomes easier for everyone. The transformation of the area would allow safe access for people across all age groups, irrespective of their gender, or socio-economic status.

As part of the redevelopment project, Nucleus Office Parks will aim to streamline the vehicle lanes and build more than three kilometers of pedestrian walkway including a separate track for cyclists.

A separate track for cyclists will ensure a sustainable plan for mobility and may encourage people to utilise an eco-friendly mode of transport. The sustainable plan of rebuilding infrastructure in the business district is a convenient solution to decongest traffic in the area.

A track for cyclists will provide a safe solution for children and youngsters to utilise the area for recreational purposes. Additionally, pedestrian walkways will also allow residents who live nearby to walk down to their offices.

As part of the redevelopment project in the Lower Parel area, Nucleus Office Parks is also planning to build a new public community park under the flyover. The community park will be equipped with resident-centric facilities such as improved lighting, seating areas, playgrounds, exercise equipment, and artwork. The community park will assure that people continue with their leisure and recreational activities even around a prime business district of the city. As swings and slides will be installed for the playground area, children will be able to conveniently access the area for playing. Youngsters, adults, and senior citizens will also be able to access the park for exercising, walking, yoga, etc.  The model will ensure a well-rounded recreational approach for upgradation of urban infrastructure. Apart from easing mobility which ensures safety, the recreational approach ensures the comfort and livelihood of residents.

The construction of the infrastructure project began in December 2020. Nucleus Office Parks aims to open the first phase of the project for public by the next month. The phase will result in gradual decongestion of the Lower Parel area and ensure a sustainable approach for urban development. With the subsequent phases, an ecological balance is likely to be restored in the business district, ensuring better roads and safer commuting for people. The infrastructure project is one step towards a better Mumbai.

Nucleus Office Parks bears the responsibility of the accuracy and completeness of the above article.

Disclaimer: This is an advertorial and NDTV is not responsible for the accuracy of the content.

Back To Work After A Pandemic - With WeWork Members