Oyo is the latest Indian unicorn to file its intent to go public after food delivery startup Zomato Ltd. became the first to list in July. 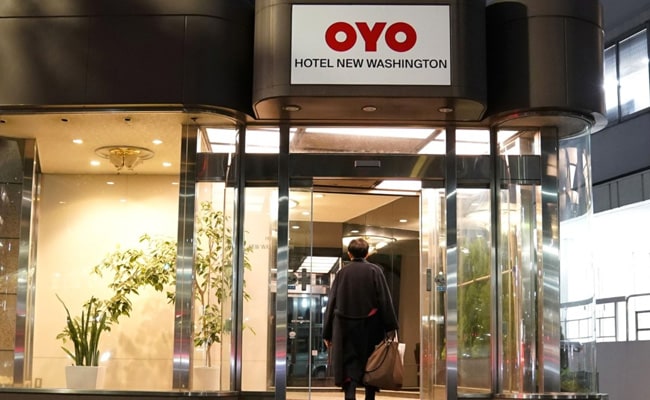 India, Malaysia, Indonesia and Europe account for more than 90% of the hotels listed on Oyo's platform.

The SoftBank Group Corp. and Airbnb Inc.-backed firm plans to raise Rs 7,000 crore through the sale of new shares, according to the filing. The rest will be secondary shares or those sold by existing stockholders. The startup was last valued at about $9 billion, according to CB Insights, making it India's third most valuable startup.

The filing of the draft red herring prospectus of Oyo, which is officially known as Oravel Stays, marks a dramatic recovery after the pandemic buffeted the travel and hospitality industry. The startup has refashioned itself, moving away from a business model that brought financial stress, soured its relationship with hotel owners and brought on court battles.

Oyo has stopped offering minimum guarantees to its 157,000 partners -- hotels, homes and resorts on its marketplace that it dubs storefronts -- and no longer invests in upgrading the standards of the hotels. Instead, the company forges revenue-sharing pacts with partners and gets full and exclusive control over the hotel owner's inventory.

Oyo is the latest Indian unicorn to file its intent to go public after food delivery startup Zomato Ltd. became the first to list in July. Digital payments startup Paytm and Nykaa, an online retailer of beauty products, are among others that have filed initial documents. Edtech Byju's, the country's most valuable startup, is also considering an IPO in the early half of 2022, Bloomberg News has reported.

Agarwal established Oyo in 2013 after dropping out of college. Now 27, he will be worth billions of dollars if Oyo has a successful listing. The high-profile entrepreneur was part of a rarefied group of SoftBank-backed startup founders coached by Masayoshi Son himself. In 2019, Agarwal invested $2 billion, mostly borrowed, to triple his stake in the lodgings startup and take his ownership to nearly a third.

India, Malaysia, Indonesia and Europe account for more than 90% of the hotels listed on Gurgaon-based Oyo's platform. The budget lodgings marketplace also offers stays in China, the U.S. and dozens of other countries, though its global expansion was curtailed by the pandemic.

The app has been downloaded 100 million times, according to the filing, making it one of the most-popular travel apps in the world alongside Airbnb and Booking.com. It has more than 9 million users in its loyalty program, generating direct demand from customers.

More than two-thirds of its workforce, including its technology team, are based in India, according to the IPO filing. In its home market, over 92 per cent of hotels are un-branded, standalone properties that fall under the "unorganized" hotel category, according to the filing.