Why Indian Immigrants Are Rocketing To The Top In US

Almost all children of recent immigrants tend to be more upwardly mobile than people whose parents were born in the US.

The US is still a land of opportunity for immigrants. That is the implication of a new research paper by economists Ran Abramitzky, Leah Platt Boustan, Elisa Jacome and Santiago Perez.

Using historical Census data to compare the incomes of immigrant fathers and their native-born sons, the economists found that the second generation has been just as capable of moving up the economic ladder in recent decades as they were a century ago. Looking at second-generation American men whose immigrant fathers were at the 25th percentile of income - in other words, fairly poor - they found that they tend to climb higher than their poor counterparts whose fathers were born in the US. And for most countries the researchers could measure, immigrant upward mobility is greater now than it was a century ago: 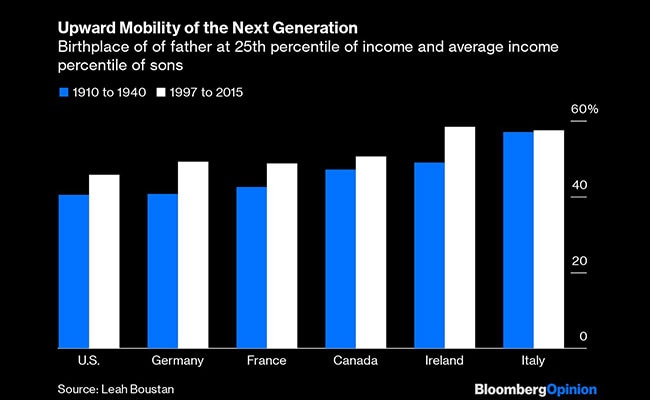 Almost all children of recent immigrants tend to be more upwardly mobile than people whose parents were born in the US. That isn't surprising, since immigrants often have limited English skills and lack personal networks in the country; their children, who don't suffer these disadvantages, naturally tend to move up to an income level more commensurate with their ambition and abilities. Furthermore, immigrants tend to move to places where upward mobility is easier, like big cities and college towns.

But immigrants from some countries are especially mobile: 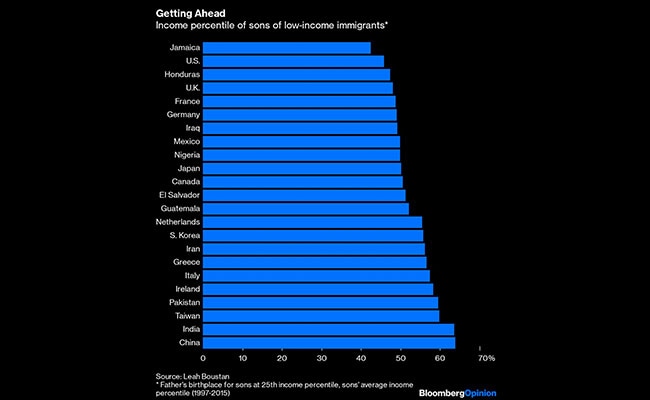 The average second-generation Indian- or Chinese-American who grew up on the edge of poverty will tend to reach the upper-middle class. That level of upward mobility is simply amazing. For Indian-Americans, the phenomenon is particularly surprising, since most Indian immigrants already speak English when they arrive, and hence have less of a handicap relative to their native-born kids.

Why do Indian and Chinese immigrants do so well? Some will no doubt attribute their outperformance to cultural values of education and hard work. In reality, it's probably more about the type of immigrants who come from those countries. Indian and Chinese people tend to come to the U.S. not as refugees or unauthorized low-wage laborers, but as high-skilled workers or the close relatives of skilled workers. That means even poor Indian and Chinese immigrants tend to have prosperous friends and relatives, and to come from families that value education and ambition. And India and China have by far the biggest pools of population from which to select such driven and talented individuals.

This is especially true for India. Even in comparison with other high-achieving groups, Indian-Americans stand out in terms of education level and dominance in high-skilled occupations: 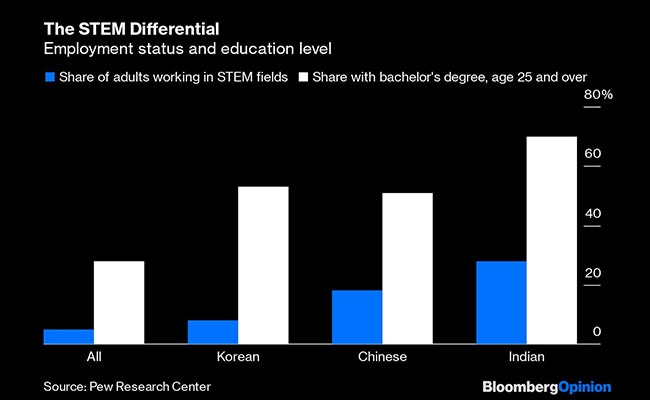 As a result, Indians are the highest-earning group by ancestry in the US, with a median household income of more than $110,000 in 2016 (the difference isn't due to larger households, since Indian-Americans also come out on top in terms of per capita income). But it's not just scientific and technical fields in which Indian-Americans excel. They are increasingly a force in politics and law. A growing number of politicians, top political staffers and judges are of Indian descent. In business, too, Indians are rocketing to the top -- two of the US's five biggest companies, Alphabet Inc. and Microsoft Corp., have Indian-born chief executive officers. Though historical comparisons are hard, Indians seem on track to be the most accomplished minority group in US history.

This is not to say that all Indian-Americans are successful; some are poor. Nor should Indian achievement be used as a reason to denigrate other lower-skilled immigrant groups. The point, rather, is that the US could benefit by letting in more Indian immigrants.

Employer-sponsored permanent residence permits, or green cards, are parceled out by country. There are about 150,00 available each year; officially, only 7 per cent of these green cards can be given to immigrants from any one country in a given year, though some countries' unused spots can be given to other countries. This system is deeply biased against big countries like India and China. In 2018, more than half of employment-based green card requests were for Indians, but Indians received only 13 per cent of the total.

One solution is to simply remove the country cap. Congress has been trying to do this, with a bill called the Fairness for High-Skilled Immigrants Act, but the legislation is being blocked by a handful of powerful senators.

Eliminating the country cap would be fair to large countries and would improve the flow of talent into the US, but it would only be a marginal improvement. A better idea is to simply increase the number of employment-sponsored green cards, and make the extra cards not subject to country caps. The US now simply admits too few skill-based immigrants: 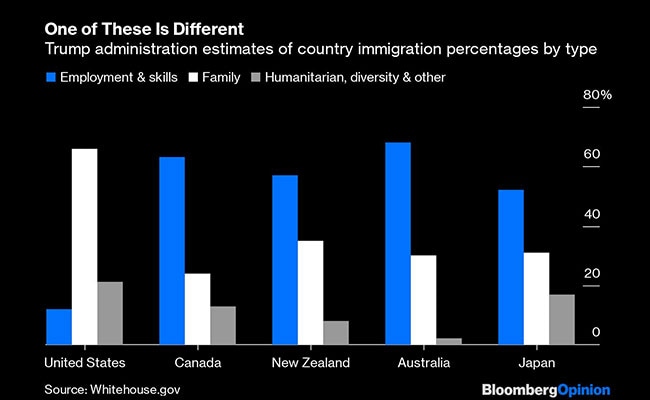 The world's biggest countries are offering the US some of their most talented people.  We should do more to help them live and work in America.

In Telecom Row, Government Could Be Making A Grave Mistake