Politicians Want V-Shaped Recovery At Any Cost. Over To RBI

A collapse in imports during the coronavirus lockdown has left India awash with dollars. Now a further influx of greenbacks is expected as an embryonic economic recovery draws investors back. To banks, this means one thing: The local currency is a sitting duck for appreciation against a weakening dollar.

Policy makers won't want a stronger rupee to become a one-way bet, but the market doesn't believe them to have many other options. What the authorities have done so far — scoop up the dollars by giving banks rupees — has left the financial system swimming in money and threatens to fuel inflation that's already above the central bank's target. It's a mirror image of China, where a spate of corporate defaults has squeezed interbank liquidity. 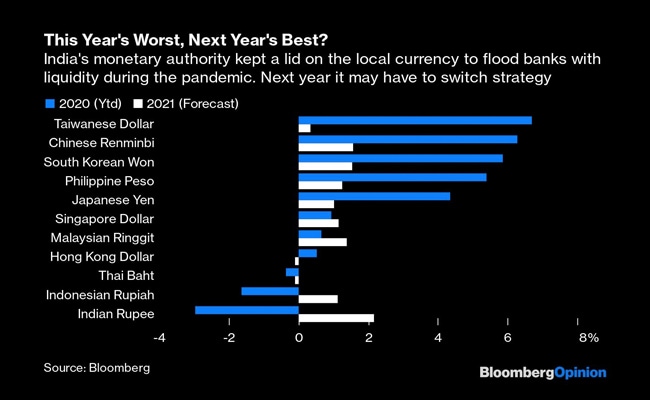 While China's recovery from the pandemic has made it the first major economy to consider exiting emergency economic measures, in India, monetary stimulus is still very much the only game in town. If the Reserve Bank doubles down on its generosity in 2021, the country's red-hot equity markets could get dangerously overvalued. Conversely, if the RBI pulls back on liquidity — before the complicated task of distributing vaccines to 1.3 billion people is meaningfully under way — confidence could be undermined by falling stock prices.

What will the central bank do? My hunch is, it won't want to be seen as anti-growth at such a critical juncture. That won't be politically acceptable, which is why there's talk of giving the RBI a more flexible inflation target — so it doesn't have an excuse to prematurely hit the brakes.

The authorities are in a bind. They have flooded banks with rupees in exchange for surplus dollars, hoping easy liquidity will not only stem the deterioration in corporate solvency but also restore missing animal spirits in the broader economy. 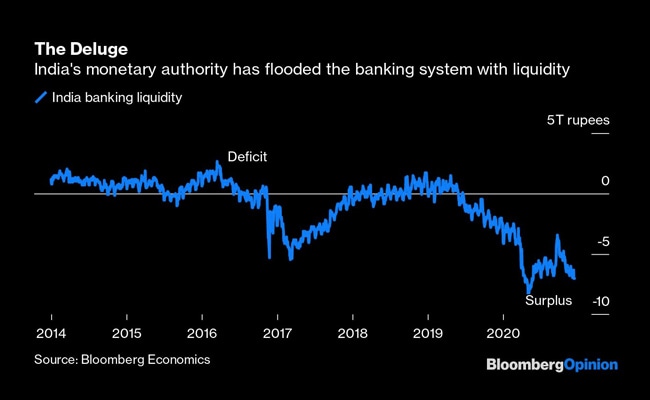 Thanks to $58 billion of RBI dollar purchases in the first nine months, the rupee is the worst-performing Asian currency this year. While inflation last month was a slower-than-expected 6.9 per cent, it has exceeded the central bank's 2 per cent to 6 per cent range for eight straight months. A stronger rupee might help the central bank tame inflation; a liquidity glut will make it worse.

Or at least that's the reasoning behind the near-consensus bet on the Indian currency. Traders are putting their money on the rupee being Asia's best performer in 2021. Everyone's looking at the record $20 billion current account surplus in the June quarter — when domestic demand cratered because of the Covid-19 lockdown — and calculating that a rupee-crushing trade deficit is still a ways off. In the meantime, foreign money will keep coming, into a $65 billion pipeline of mergers and acquisitions and government privatization deals, according to Nomura Holdings Inc., as well as into stocks, bonds and real estate.

By creating a rupee glut, the central bank has delivered the equivalent of an additional 1.25 percentage points in rate cuts — by stealth. That extends a 2.5-percentage-point reduction since February 2019, with 1.15 points coming after the pandemic hit. The Reserve Bank had to do this heavy lifting because the government didn't want its rickety finances to take too much of the strain. Bolder fiscal easing was possible only with the monetary authority directly buying the government's bonds, something the RBI was hesitant to do lest monetization of deficits become a habit with politicians.

Hence, the central bank opened the liquidity spigots instead by buying dollars. An odd result of this strategy is that “while the government has limited its support to the domestic economy, it has, via the RBI, invested almost 3 per cent of GDP in foreign assets” between April and September, according to JPMorgan Chase & Co. economist Jahangir Aziz.

What will the RBI do in 2021? If demand revives, it can slowly turn off the taps. Corporate earnings, once they're rising because of sales growth rather than layoffs and wage reductions, can attract investors even without the prop of artificially cheap money. But dislocations in India's real economy — especially in smaller firms and the labor market — have been way too deep. Chances are politicians won't want the central bank chief to remove the punch bowl in a hurry.

Governor Shaktikanta Das's strategy may be to mop up some of the excess liquidity created by dollar purchases by issuing special bonds to banks. That would have a cost, but overall this approach would keep the rupee competitive for Indian exporters and prevent an inflation spiral. It would also keep the stock market buoyant and the finance ministry happy.

After the mid-2013 “taper tantrum,” Mr Das's predecessors perhaps kept interest rates too high for too long. They also kept liquidity tight. Growth began to slow sharply long before Covid. Hence, there's pressure on the governor to accept a more flexible inflation target: Politicians will want their V-shaped recovery at any cost. How Mr Das manages their demands against threats to financial stability from cheap money may be a more important story for India investors in 2021 than the standard growth versus inflation trade-off.