India's economy hasn't been this bad in 42 years. Pulling it back from the abyss will require more honesty than imagination.

Tuesday's advance estimates for the financial year ending on March 31 peg the economy's inflation-adjusted growth rate at 5 per cent, a third year of slowdown. And even this figure could be optimistic. Consumer demand is in the doldrums and government spending - the only thing supporting growth - is bound to be pruned in the closing months of the fiscal year to avoid a budget blowout.

So much for the real economy. The main function of these advance statistics is to aid the upcoming government budget, which requires a handle on nominal GDP. By that measure, not only is the current fiscal year's 7.5 per cent growth the worst since 1978, it's substantially lower than the 12 per cent expansion the government had penciled in when projecting taxes. Needless to say, those revenue calculations have gone out of the window. 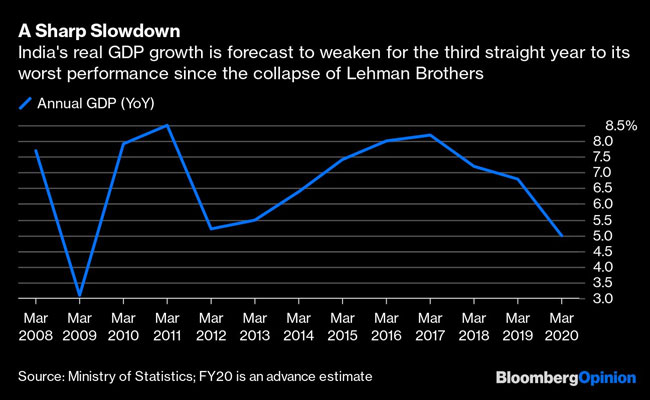 A dose of realism is called for. When Prime Minister Narendra Modi's government returned to power in 2019, it made rosy projections for public finances by completely glossing over the previous year's shortfall in tax revenue equal to 1 per cent of GDP. Any repeat of such machinations in the February 1 budget won't go down well with investors.

More well-grounded tax assumptions will reveal a big resource gap - closer perhaps to 5 per cent of GDP, including borrowings not captured in the budget but whose burden falls on the taxpayer nonetheless. State governments have a deficit equal to 3 per cent of GDP, higher than the budgeted 2.6 per cent. Add that, and the financial savings of India's households are almost fully spoken for. No wonder Indian corporate borrowers are making a beeline for overseas debt markets.

Even borrowing abroad, which hit a new record of $22 billion last year, will become costlier should India's sovereign rating fall one run into junk territory. S&P Global Ratings warned last month that it might cut India's ratings if economic growth doesn't recover. A shallow recovery will probably only show up in the second half of the fiscal year that starts in April. Meanwhile, should the recent escalation of US-Iran tensions sustain oil prices at a high level in a weakening global economy, the loss of discretionary consumer spending at home and abroad could hurt India further. 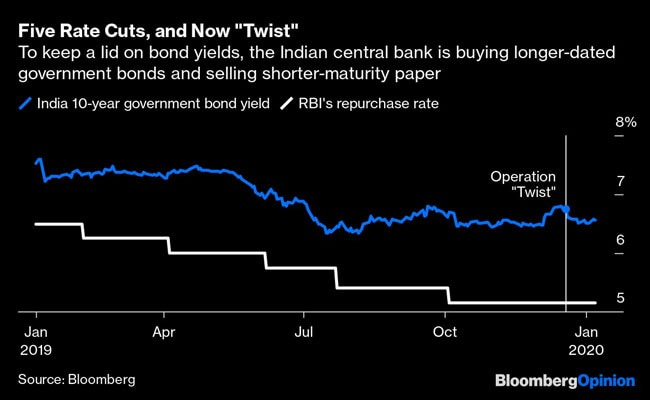 The Reserve Bank of India (RBI) is "twisting" its balance sheet - selling short-term government bonds to banks and buying long-term securities from them - to keep a lid on the benchmark 10-year bond yield. But this support may not be enough for the government's five-year, $1.5 trillion infrastructure plan, which will rely heavily on public funding.

So what's to be done? I've suggested that the central bank should purchase assets from the non-bank financial sector, which will help shadow financiers deal with their large overhang of bad loans and open up the clogged funding arteries of the economy. Tuesday's terrible nominal GDP growth figure should buttress the argument for this kind of quantitative easing.

But while the monetary authority should dare to be unconventional, the most creative tool in the government's possession - the Excel spreadsheet - won't help much. In fact, a badly needed overhaul of the broken goods-and-services tax can't even be attempted in the federal budget. It will require tough political bargaining with state governments, which share the proceeds.

Since its introduction in 2017, the GST has subsumed many of the country's indirect taxes, but it has several design flaws and compliance is both poor and expensive for small firms. According to IDFC Mutual Fund, GST collections this fiscal year may grow only 4 per cent. That's even slower than nominal GDP. A budget that papers over the very real fiscal constraints to paint a picture of business as usual will do a disservice to the task. A sober acknowledgement of the challenges is the first step toward a fix.

India Must End Yes Bank's Theater Of The Absurd