India Needs to Stop the IL&FS Rot From Spreading

The urgent first step of Reserve Bank of India, Securities and Exchange Board of India must be an emergency bailout of IL&FS.

A tad late, but the message is finally reaching India's regulators: Infrastructure lender IL&FS is not a business that can be allowed to fail without consequences. An unusual Sunday evening joint statement by the securities regulator and the central bank suggests a much-needed awareness of systemic risks.

Infrastructure Leasing & Financial Services Ltd. is a sprawling nonbank institution that used its highly rated paper to chalk up $12.5 billion of debt, which it funneled into the financing of long-term assets like roads, townships and water-treatment plants. Most of these businesses are owned by IL&FS-linked operating companies.

The opacity masked growing liquidity problems, though only up to a point. Some of the group's finance companies are now missing repayments on short-term paper, even as the unlisted parent's owners, including state-run Life Insurance Corp. of India, dawdle over an emergency infusion of funds.

The task of highlighting the systemic risks fell to equity markets. Dewan Housing Finance Corp. led the carnage on Friday when its shares fell more than 42 per cent. (They were down almost 60 per cent at one stage.) Most other shadow lenders, which make retail loans but don't take deposits, also dropped between 12 per cent and 17 per cent.

The bloodbath was sparked by the money market, where a mutual fund sold Dewan's notes at a yield of 10.75 per cent, compared with 8.6 per cent for other corporate debt locally rated as AAA. 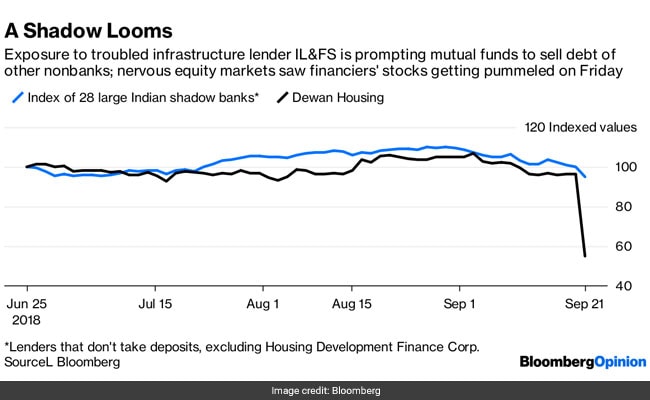 DSP Mutual Fund, which is exposed to IL&FS's securities, said its sale was a response to rising interest rates rather than a view on Dewan's creditworthiness. But the damage was done. Now Dewan is busy convincing the market that it has nothing to do with IL&FS, and that even after paying principal and interest obligations on commercial paper, loans and other debt, it always would have had at least $1.65 billion of surplus liquidity through March 2019.

The Indian authorities shouldn't have waited for a self-fulfilling liquidity crisis to raise its head. It was obvious that investors would want to dump mutual funds they believe will now have to write down their IL&FS exposure. Funds, in turn, would have to sell other paper to meet redemption requests.

As secondary market yields surged for nonbank lenders' debt, their ability to roll over short-term obligations will be tested, and their equity prices will fall. Credit-rating companies, bruised by their inability to see IL&FS defaults coming, won't want more investor criticism for being late. Hasty downgrades will push up borrowing costs even more.

Even securitization of affordable home loans - a taxpayer-subsidized mortgage line growing by leaps and bounds - won't work. Investors may still like the home loans, but if the financier who's supposed to collect monthly checks for 15 to 20 years might struggle to survive that long, who'll want to buy into a portfolio of its loans?

That, then, is the risk of leaving IL&FS unresolved. Its $12.5 billion in liabilities may be small beer compared with the $210 billion bad-loan debacle at deposit-taking Indian banks. But the poorly run state-owned banks still get 78 per cent of sticky household deposits and have access to both interbank liquidity and the central bank's emergency lines. They're part of an inner circle of trust. IL&FS, despite its pretensions to being quasi-sovereign, isn't in that circle.

Mutual funds that supply liquidity to shadow banks have been caught unawares by the IL&FS fiasco. It doesn't look as if they have the capacity to go beyond ratings reports and independently price risks, so they may now overcompensate and make matters worse for healthy nonbank lenders.

As I've said, IL&FS was threatening to become India's mini-Lehman moment. So far, money-market risks have spilled over into equities. If the unease spreads the other way around, things could get uglier still. (While Dewan's shares recovered some of their losses Monday morning, most other Indian finance stocks fell again.)

That's why it's important for the Reserve Bank of India to join forces with the Securities and Exchange Board of India to deal with the fallout. Their urgent first step must be an emergency bailout of IL&FS, before it does more harm.