The cryptocurrency crowd has wasted no time in dancing on the grave of Chinas "FUD" (internet speak for fear, uncertainty and doubt).

The cryptocurrency crowd has wasted no time in dancing on the grave of China's “FUD” (internet speak for fear, uncertainty and doubt). Last week's move by the People's Bank of China to ban crypto transactions and mining dented the prices of Bitcoin, Ethereum and other digital currencies, but they've largely rebounded.

The bulls reckon the latest attempt by Beijing to crack down on crypto — the seventh, by research firm Fundstrat's calculations — will fail to throttle an asset that bypasses borders and banking systems. They also hope that what seems “bad” for crypto will prove to be “good.” Advocates are using China's ban as ammunition to promote an opportunity for America: It can lead the way for a more permissive approach to crypto. 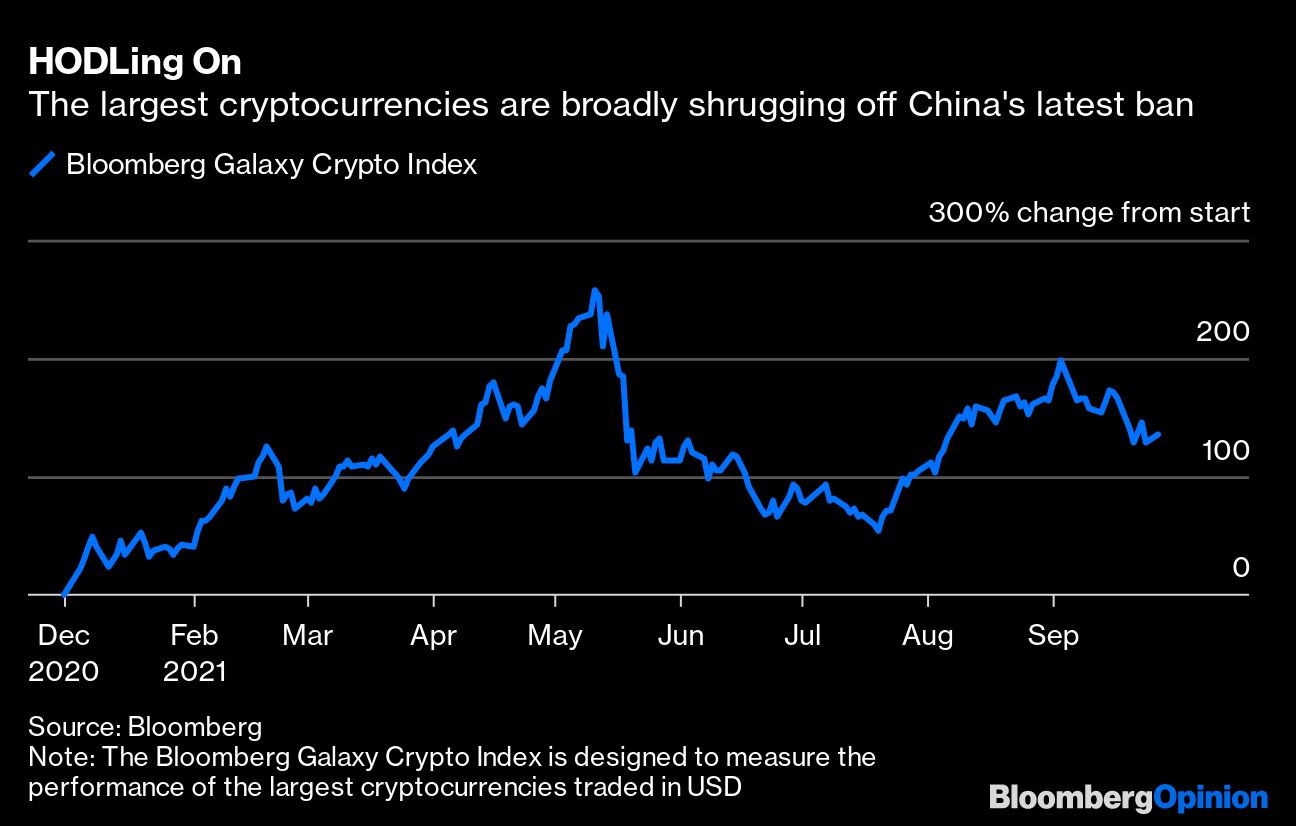 This looks like the kind of warped logic that paints Bitcoin mining as a “green” form of energy use, even as it breathes new life into aging fossil-fuel power plants. What's bad for crypto sometimes really is just bad.

The jury may be out on whether this ban will be more successful than previous ones, but painting it as a way for the U.S. to steal a march on China is a stretch. The Biden administration has made clear it sees cryptocurrencies as fuel for ransomware, a vehicle for fraud and a potential threat to financial stability and post-Covid reconstruction. The crypto industry has attempted to plead for more lenient treatment as a poke in China's eye in the past — see Facebook Inc.'s Mark Zuckerberg's defense of the Libra project — to no avail. More regulation of this sector is undoubtedly on the way, and those on the frontlines know it.

The question of whether the U.S. could follow suit with a ban of its own, as Ray Dalio has imagined, is a trickier one. The laser-eyed crowd may have a point in that it's getting rather late in the day for the U.S. to try the Chinese approach, not least with Wall Street eyeing a bigger share of the crypto pie. But that doesn't mean regulation is out of sight. In fact, it's quite the opposite.

The crypto market has metastasized into a $2 trillion monster, driven by a Fear of Missing Out (FOMO) that continues to draw in smart wealthy people, especially in North America. That's where one-third of specialist crypto hedge funds — worth $3.8 billion, according to PwC — are listed, and where endowment funds and hedge-fund billionaires are starting to dip their toes. The time for regulation is ticking as the ranks of wealthy backers grows.

Ironically, one of the closest things to a U.S. crypto “ban”  — a raft of proposals by the Bank for International Settlements that might force banks to hold one dollar in capital for each dollar worth of Bitcoin — has triggered an outcry from Wall Street. A letter sent by several financial-industry associations to the BIS called the package too “restrictive,” and would stop them catering to customer demand. Even with evidence piling up that crypto is a nightmare when it comes to environmental, social and governance concerns, plenty of investors are happy to keep buying.

Those assuming that the rivalry between the U.S. and China will be favorable for a cryptocurrency like Bitcoin are kidding themselves. The ante is being upped for regulators in a post-Covid world, where lives are increasingly lived online and where technology makes weak governance an even bigger threat. China's crypto ban is designed to boost its own pandemic priorities — including favoring a digital-currency revamp of the yuan. Central banks elsewhere in the world have their own versions of programmable money in the works.

A truly effective global crackdown on crypto is only hard to imagine because of the political will and capital needed to achieve it; it's not a technological impossibility. There would need to be international cooperation like that seen in the crackdown on tax havens, combined with national measures like those 20th-century rules preventing the private ownership of gold. But China and Covid may end up making this mix more likely, not less.

Crypto-evangelists should bear this in mind. FOMO may have the upper hand now, but FUD won't be far behind.