An RBI Move That Could Lead To Digital Currency In India

The idea of a central bank digital currency, which will reside on smartphones but as a direct claim on the state (rather than a bank) is gaining ground everywhere

India's central bank is opening its balance sheet to the public. Retail investors will have online access to the government bond market via investment accounts with the Reserve Bank. As the government's investment bank, the RBI manages institutional buying and selling in gilt securities. Skepticism is high about "Retail Direct" because previous attempts at bringing public debt to the masses haven't gone anywhere. But if the initiative takes off, it could be a precursor to an interest-paying digital currency competing with bank deposits.

The idea of a central bank digital currency, which will reside on smartphones but as a direct claim on the state (rather than a bank) is gaining ground everywhere. Covid-19 has made people reluctant to handle cash for fear of infection. The pandemic has also underscored the need to extend timely financial support to people who don't have bank accounts.

The rise of cryptocurrencies and Facebook Inc.'s Libra initiative, now known as Diem, have made authorities sit up and take note. If they don't offer their own official tokens, private coins - or another country's virtual cash - might fill the vacuum. Any semblance of monetary sovereignty in emerging markets may be compromised.

A quarter of the world's population is likely to get access to a general purpose central bank digital currency in one to three years, according to the latest Bank for International Settlements survey of monetary authorities. Regulators in another 21 per cent of jurisdictions aren't ruling out the possibility that they, too, might join in. That number is up from 14 per cent in a 2019 BIS poll.

Unlike China, which is running pilots, and the European Central Bank, which will soon publish results of its public consultations, India is not a frontrunner in the race to issue virtual cash. While summing up the many changes in the payments landscape over the past decade, the RBI said last month that it's "exploring the possibility as to whether there is a need for a digital version of fiat currency and in case there is, then how to operationalize it."

That's why Retail Direct assumes significance, says Krishna Hegde, head of strategy at Setu, a Bangalore-based fintech firm. Rather than taking the weight of individual investors on its core banking system, perhaps the RBI will only allow their banks to act as custodians. Individual investors will come to the government securities marketplace through their banks' so-called Constituents' Subsidiary General Ledger accounts with the monetary authority. But if money can move quickly and without friction between these accounts at the central bank, India may get a version of official digital cash. 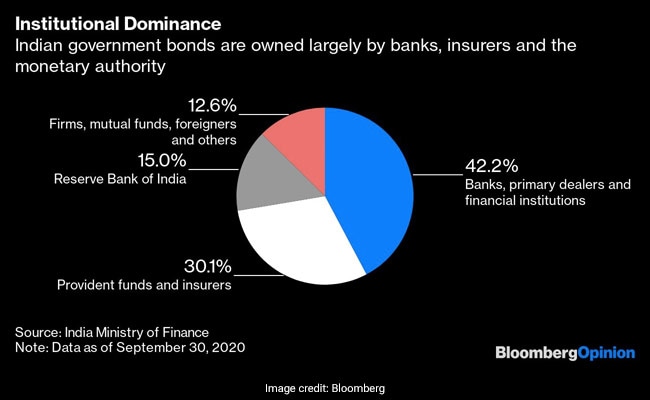 This could have long-run implications for the banking system. State Bank of India, the country's biggest lender, offers 2.7 per cent interest on demand deposits, and 5.4 per cent on five-year deposits. A seven-day treasury bill yields 3 per cent, and a five-year government bond trades at 5.8 per cent. Banks with large deposit bases may not want to popularize a product that could undermine their hold on low-cost household savings. But newer institutions like payments banks, which take small deposits and aren't allowed to lend commercially, will run with it.

Whether meaningful excess yield will actually be available will depend on liquidity, and the cost for market makers to provide it. That's where blockchain might come in handy. Self-executing contracts programmed into virtual tokens can help fractionalize and democratize finance by automating trade settlement, making it both quicker and less expensive. Once they're widely used as a store of value, the tokens could also start circulating as a means of exchange. Anyone may be able to pay for a coffee using her account with the central bank, just as she does today by debiting her balance with a commercial bank.

An interest-bearing virtual currency may help counter the appeal of other private and official digital cash to India's millennial savers. The federal and state governments will obtain financing for a part of their chronic budget deficits - which have ballooned after the pandemic - directly from households. They can do so even now by scooping up postal and other small savings.

But those borrowings are more expensive than what it costs to raise funds in the bond market. Without guaranteed recourse to cheap and sticky current and savings account balances, banks will have to work harder to earn a return on equity.

Perhaps the central bank doesn't have any of these objectives in mind, and it's giving retail investors direct access to the bond market only to protect its turf from the Securities and Exchange Board of India, the securities regulator. Whatever the motivation, once it gets off the ground, the RBI should consider Retail Direct as a prototype for digital cash, and allow experimentation in a supervised environment. It's an idea that could go far.