Anil Ambani, the younger brother of Asia's richest man, faces a $680 million legal test to answer one and only one question: Just what did he know about what his employees were doing on his behalf? Other Indian tycoons will take an abiding interest in his defense.

The $680 million is the amount Industrial & Commercial Bank of China Ltd. is seeking to recover from the former Indian billionaire by invoking what they say is a personal guarantee he gave in 2012 to secure a $925 million loan for Reliance Communications Ltd., his mobile services firm that's now in bankruptcy. Ambani, whose older sibling Mukesh controls Reliance Industries Ltd., India's most valuable company, claims he never knowingly provided any guarantee.

In his version, he had only authorized his employees to furnish a non-binding "personal comfort letter" to lenders, including ICBC, China Development Bank and the Export-Import Bank of China. Somehow, that letter of comfort morphed into what the banks now argue to be an iron-clad guarantee under English law. "A truly remarkable feature of Mr. Ambani's case,'' London Judge David Waksman said in his order Monday, "is that he has himself proffered no explanation as to why he should have been deceived in this way."

As to how personal assets were put at risk unbeknownst to the boss until RCom defaulted in 2017, the order noted that Ambani's lawyer had argued that his client's "position was that 'he hasn't got a clue' how all of this came about." Judge Waksman stopped short of awarding the summary judgment requested by ICBC, though not before characterizing Ambani's evidence as "inexplicably incomplete, implausible and highly unlikely."

A trial will commence next year. Pending the verdict, the court may ask some or all of the claim to be deposited with it.

Ambani's representative focused on the the judge's decision to dismiss the banks' application for a summary judgment. "Mr. Ambani has contested the proceedings and put up a strong legal defense, and will continue to contest the proceedings and seek leave to defend, without any conditions as to making of deposits or payments being imposed," the representative said in a statement, according to Bloomberg News. 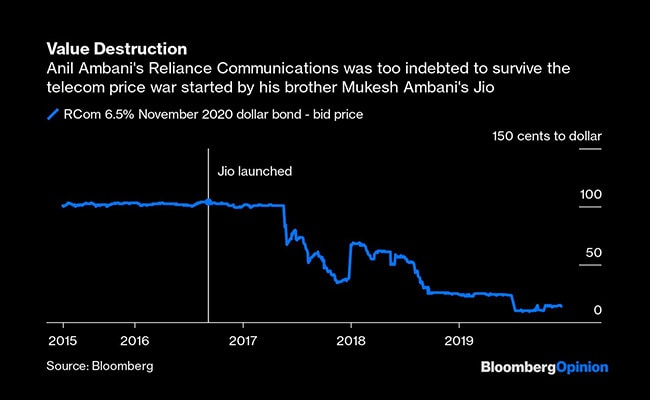 This is the younger Ambani's second brush with the pitfalls of personal guarantee. Earlier this year, he managed to avoid a three-month prison term when his elder brother showed up just in time to settle the $80 million claim of Ericsson AB. The Swedish telecom equipment maker had obtained a contempt-of-court order to put Ambani in jail if the payment - which he had personally guaranteed - wasn't received by March 19.

Other Indian business families should treat Ambani's travails as a cautionary tale.

When India's economy was booming, and firms were greedy to use leverage to grow, many of their controlling shareholders liberally gave out personal guarantees to lenders. But the rosy assumptions behind aggressive, debt-fueled expansion have come unstuck for many borrowers in an economy that has slowed down sharply. The Ruia family recently lost its crown jewel - a 10 million-tons-a-year integrated steel plant in western India - to ArcelorMittal.

Even here, the former asset owners had backed their borrowings with personal guarantees, and State Bank of India, the main lender, had even made an attempt to enforce them. With Mittal's $6 billion check in the bank, that recovery may have now become a moot point. But from Dec. 1, personal guarantees on corporate loans will be adjudicated under Indian bankruptcy law. That will put a healthy fear in the minds of Indian businessmen about borrowing too recklessly. Their own assets could end up getting liquidated together with those of their companies.

As for Ambani, he'll get his day in an English court to prove his lack of awareness. The bar is high, though. "I consider it extremely unlikely that his role was really limited to simply chairing board meetings with little or no interest or role in what RCom was doing, especially in the context of a major refinancing which was needed urgently," Judge Waksman noted.

This has all the ingredients of an engaging courtroom drama.