Oil Morphs From PM Modi's Blessing To Burden. This Is Why

While low prices helped shrink deficits as PM Modi cut subsidies after taking the reins of Asia's third-largest economy in 2014, a 33 percent jump in global benchmark crude since June has lifted oil close to $65 a barrel. 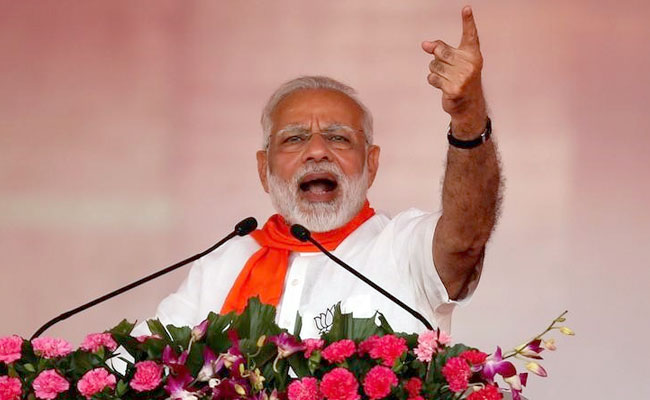 Narendra Modi's first term as leader of the world's fastest-growing oil market coincided with the biggest price crash in a generation. Crude's rebound into a bull market is set to test the Indian Prime Minister as he gears up for re-election in 2019.

While low prices helped shrink deficits as PM Modi cut subsidies after taking the reins of Asia's third-largest economy in 2014, a 33 percent jump in global benchmark crude since June has lifted oil close to $65 a barrel. If it hits and stays at that level in the year through March, inflation could rise by 30 basis points and a key measure of growth may weaken by 15 basis points, the central bank estimates.

That threat is ill-timed for PM Modi. His government's grappling with weaker economic growth that's forecast to slow to a four-year low in the wake of an unprecedented cash ban and the chaotic roll out of a goods and services tax. How he tackles oil's surge will determine the credibility of criticism that he got lucky with low crude prices, a refrain he's rebutted. Data due Monday will probably show inflation quickened to a seven-month high in October. Oil's jump is expected to push the yield on India's 10-year government bond to a 2017 high of 7 percent from 6.93 percent on Thursday. Consumer prices rose 3.4 percent in October from a year earlier, according to the median estimate of 13 economists, quickening from September's 3.28 percent pace.

That means the Reserve Bank of India will have less room to lower interest rates and spur flagging growth. However, Bloomberg Economist Abhishek Gupta says that while the oil-price surge may push up inflation, bond investors should be comforted by a cut in domestic fuel prices, a high probability of more reductions in the GST, and his prediction that the local currency will strengthen.

When PM Modi was sworn in as Prime Minister in May 2014, after promising in his campaign to introduce market-friendly policies and boost economic growth, global benchmark Brent crude was trading at more than $100 a barrel. The very next month, crude began a descent that dragged it down all the way to below $30 in early 2016 amid concern over a global glut and surging U.S. shale production.

That collapse helped PM Modi during the first two years of his five-year term, giving him the leeway to cut subsidies on diesel and cooking gas, a move that may have been politically unpopular if oil weren't so low. It also allowed him to raise taxes on fuel, helping shrink Asia's widest budget deficit.

Now, oil's rising as OPEC and allies including Russia curb output to clear the global oversupply, while the Indian rupee is weakening against the dollar. Both are risks for Sankaran Naren, chief investment officer at ICICI Prudential Asset Management Co., the country's largest money manager. He estimates that Brent at $65 would add $5 billion to the nation's current-account deficit, which ballooned to $14.3 billion in April-June from $3.4 billion the previous quarter.

Nomura, meanwhile, estimates a $10-per-barrel increase in oil would worsen the current-account balance by 0.4 percent of GDP, widen the fiscal shortfall by 0.1 percent of GDP, and increase wholesale inflation by about 1.4 percentage points.

The WPI gauge averaged 2.5 percent in April to September, a period when India's oil bill rose more than 17 percent from a year earlier even though PM Modi's abrupt cash clampdown dampened demand for fuel. Consumption has since recovered -- demand in September grew the most in 10 months -- threatening to inflate costs even more.

As crude rallied, the government last month moved to cut taxes on gasoline and diesel. The decision was triggered by a public outcry and is estimated to cause a 130 billion-rupee loss to government revenue in the current fiscal year. Meanwhile, the economic slowdown has re-energized PM Modi's political opposition.

Before the reduction in fuel costs, PM Modi's administration had raised taxes nine times, resulting in a nearly five-fold jump in levies on diesel and an increase of more than double for gasoline.

The spurt in oil "will impact the current-account deficit and inflation," said Gopikrishnan MS, head of foreign exchange, rates and credit for South Asia at Standard Chartered Plc in Mumbai. "Any cut to taxes to reduce the burden on users will impact the fiscal situation."
Comments
PM ModiCrude oil price