Noel Tata takes over as chairman of Trent 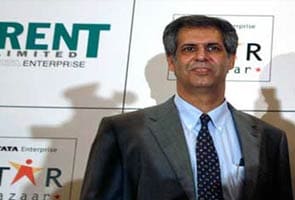 Tata, who has been Vice-Chairman of the company, assumed the new role on March 31, 2014.

"...in compliance with the Tata policy on retirement of directors, F K Kavarana who has been the chairman of the company since 2006 has stepped down. N N Tata has taken over as the chairman with effect from March 31, 2014," Trent Ltd said in a BSE filing.

Tata has overseen growth of the company since Trent took over the business of the UK-based company Littlewoods International (India) in 1998.

Having led Trent as managing director for more than 11 years, Tata was appointed the vice chairman of the company and also took over as managing director of Tata International (TIL) in August 2010.
Established in 1998, Trent runs lifestyle chain 'Westside', hypermarket chain 'Star Bazaar' and 'Landmark', a books and music chain.

Promoted
Listen to the latest songs, only on JioSaavn.com
Earlier this year, British retail major Tesco formed a joint venture with the Tata Group firm by buying a 50 per cent stake in Trent Hypermarket Ltd (THL) for about 85 million pounds.