No express lane for Wal-Mart, rivals in India 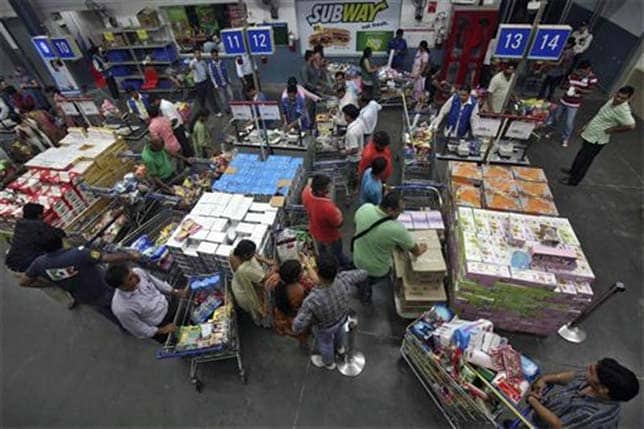 After finally getting his wish on Friday, now comes the hard part for Jain, country head for the world's biggest retailer, which must negotiate a thicket of restrictions to set up shop in the world's second most-populous country.

Turning a profit in India for global supermarkets is widely expected to prove even tougher than in China, where Wal-Mart Stores Inc loses money after a dozen years and restrictions are fewer than those imposed by India.

Wal-Mart, which has been ramping up its wholesale operation in India, where it operates 17 of the cash-and-carry stores allowed under the old rules, is determined to get its retail business right in a country where even local chains struggle.

"We are able and willing to invest whatever it takes in the supply chain, in the retail formats to move our business forward," said Jain, days after India unexpectedly threw open its doors to supermarkets in the face of heavy political opposition as part of a broader spate of reforms.

Bentonville, Arkansas-based Wal-Mart and rivals such as France's Carrefour and UK-based Tesco Plc did not get everything they wanted.

Under the new rules, states can opt out of allowing in foreign players - a choice most seem inclined to make, at least for now - and even in those states that welcome them, stores will be permitted only in cities of at least 1 million people.

Foreign multi-brand retailers will also be required to invest at least $100 million, with half of that going into back-end infrastructure in rural areas, and source 30 percent of goods from small and mid-sized local suppliers.

"We sent our thoughts to the government that 30 percent was very high ... and obviously they looked at that and chose not to amend it," said Jain, who was previously based in Shanghai as head of emerging markets for Wal-Mart International.

"In the short term it's a requirement which probably can be met but as the business starts expanding, the issue will be how ... you continue to comply with it as you would have many more suppliers than you will desire to have," said Jain, who expects it take 12-18 months to open the first India store.

India's organised retail market could attract up to $16 billion in foreign direct investment (FDI) over the next three years, much of that in the farm-to-store supply chain network, according to estimates by Boston Consulting Group.

The restrictions are meant to appease fierce political opposition that forced New Delhi to backtrack from a similar plan late last year, and could yet scupper the latest push.

The rules add to the difficulties of a $450 billion market already so tough that even Reliance Industries, India's most valuable company and owner of the second-biggest supermarket chain, has never made a profit in retail.

"The market has opened up in pieces and so it is crucial retailers evaluate the returns on their investments over a medium to long term," said London-based Himanshu Pal, director of retail insights with consultancy Kantar Retail.

Carrefour, the No.2 retailer, has taken a more cautious approach in India, where it has opened two wholesale stores.

Milos Ryba, senior retail analyst at PlanetRetail, expects it to maintain that approach: "I don't think Carrefour would change its strategy for India in the short-term. The new FDI law is tricky with many conditions."

Carrefour has declined to comment on its plans since New Delhi's decision.

Only nine of India's 28 states - those governed by the ruling Congress party and its allies - have so far pledged support for the retail reform. Eleven major states ruled by the opposition and some allies of the government have opposed it.

The states that support the move have 19 cities of at least 1 million, including Mumbai and Delhi, India's biggest cities. States opposed have 37 big cities including Kolkata and Chennai.

That patchwork map complicates setting up supply chains and sourcing networks, undermining a key benefit sought from the policy in a country where up to one-third of fresh produce rots before it can be eaten.

"Everyone is optimistic most states will turn around and eventually allow FDI, but the concern is what if they don't open up, or if they take really long," said a senior official with local retail chain Trent, who declined to be identified because he is not permitted to speak with the media.

"Then will there be enough scale on the front-end to justify this kind of investment in the back-end?" he asked.

Trent, controlled by the Tata group, runs the Star Bazaar hypermarkets in a supply chain tie-up with Tesco and the two are expected to join forces to open stores that would be 51 percent owned by Tesco, the maximum allowed under the new rules.

Like India, China was seen as a Holy Grail for global retailers drawn by a huge population and rapidly growing disposable incomes.

"India as a market will be even more tough than China," said Harminder Sahani, managing director of retail consultancy Wazir Advisors in Gurgaon, India.

Wal-Mart's Jain said that while China and India are vastly different, they have variety between regions in common.

"... Food habits actually change every 200 kilometers in India. We need to regionalise that assortment. We need to focus on local flavours, local brands and regional brands," he said.