Many notable Wall Street investors and analysts have bought into the idea of using cryptocurrencies as a hedge against rising prices. 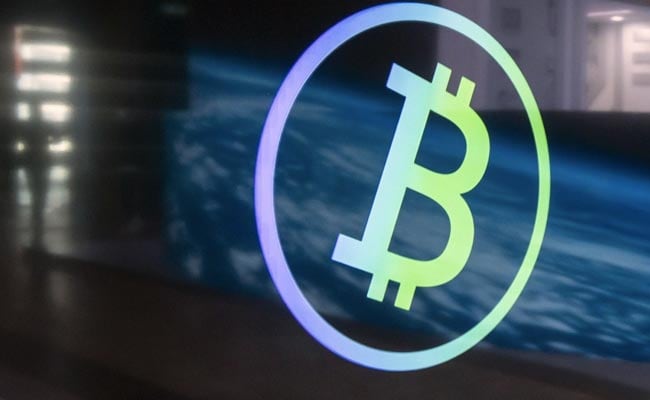 Bitcoin might hold its value over a very long run.

On Wednesday, U.S. inflation data come in much hotter-than-expected. Almost immediately after the number hit the wires, Bitcoin notched a record high. Coincidence?

To many, it's not so much a chance happening as something they'd been predicting for a long time now -- that the world's largest digital asset makes for a great hedge against rising prices in the economy.

Here's the gist of the argument: unlike dollars or any other traditional currency, the digital coin is designed to have a limited supply, so it can't be devalued by a government or a central bank distributing too much of it.

One way to test the thesis is to plot U.S. prices against Bitcoin. Bloomberg Opinion's John Authers has done the math: Over the last decade, the headline consumer price index has risen roughly 28%, and denominating that gauge in Bitcoin shows deflation of 99.996%. In other words, what cost one Bitcoin 10 years ago would now cost 0.004 satoshis, or a smaller unit of the cryptocurrency that now trades at around $65,000. 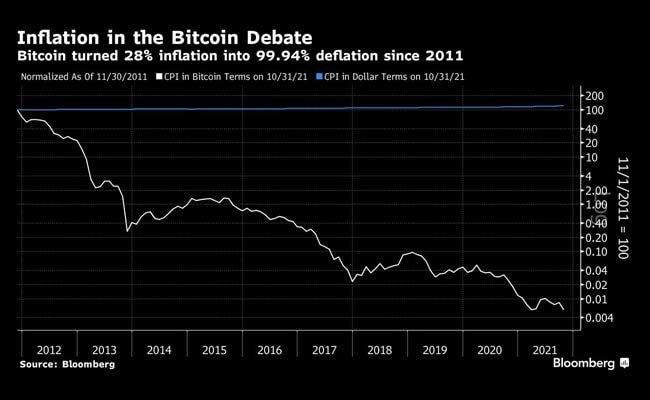 Bitcoin-as-an-inflation-hedge arguments have been around since the token was created in 2009 following the great economic recession. The premise has gained momentum as prices on everything from food to gas to housing have advanced faster and been stickier over the past few months than many economists had anticipated. Wednesday's data showed U.S. consumer prices rose last month at the fastest annual pace since 1990, in effect cementing high inflation as a hallmark of the pandemic recovery.

Many notable Wall Street investors and analysts have bought into the idea of using cryptocurrencies as a hedge against rising prices. Veteran hedge fund manager Paul Tudor Jones has said in the past that he likes it as a store of wealth. Meanwhile, MicroStrategy Inc.'s Michael Saylor said the Federal Reserve's relaxing of its inflation policy helped convince him to invest the enterprise-software maker's cash into Bitcoin.

Economists with Bloomberg Economics estimate that roughly half of Bitcoin's recent returns can be explained by inflation fears, with the other half coming from market exuberance and momentum trading. "Our model shows that for Bitcoin, the importance of inflation and hedging against uncertainty become more important drivers over time, accounting for 50% of price moves in the latest cycle relative to 20% in 2017," said Bjorn van Roye and Tom Orlik in a recent note. 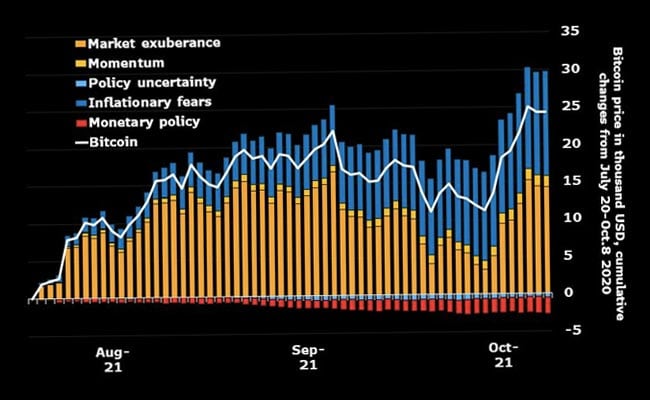 Strahinja Savic, head of data and analytics at crypto derivatives provider FRNT Financial Inc., says another way to illustrate the inflation protection provided by Bitcoin versus fiat currencies is to chart the Fed's balance-sheet expansion versus the coin's supply. 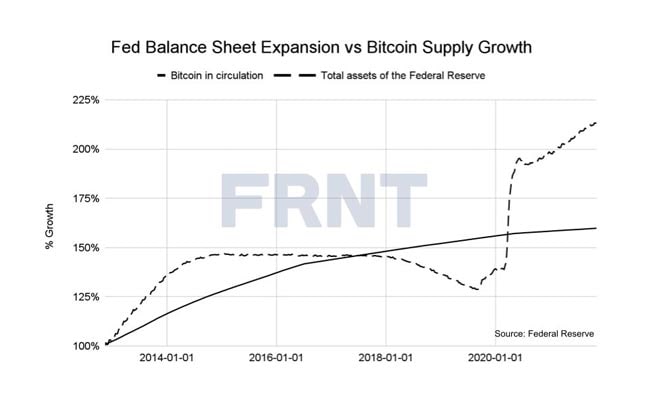 "Not only is the dilution of Bitcoin much less aggressive than USD over the last six years, it's also much more consistent, not susceptible to political whims and, of course, predictable," he said via email. "Bitcoin's programmed predictability contrasts it from the uncertain policy decisions that impact the dollar."

But there are plenty of counter-arguments too, most notably that Bitcoin hasn't been in existence long enough to establish it can for sure act as a hedge amid rising prices.

Theoretically, there is no linkage between Bitcoin's supply and anything that goes on with the Federal Reserve or any central bank, says Cam Harvey, a professor at Duke University and a partner at Research Affiliates. That means it shouldn't be impacted by whatever inflationary policies are being pursued around the world. In addition, Bitcoin's price is very volatile -- and over the long-term, inflation isn't, he says.

Bitcoin might hold its value over a very long run. In his research on gold, Harvey found that it has held its value well for millenniums. But he also found that it's prone to manias and crashes over shorter periods.

Lastly, Bitcoin doesn't behave as if it's decoupled from everything else in the economy. "It behaves like a speculative asset," Harvey said by phone. He cited the coin's drop in March 2020, when it lost roughly half its value amid a plunge in U.S. stocks.

"Investors need to be cautious if they're thinking that an allocation to Bitcoin is going to provide short-term inflation protection because we know if inflation goes up unexpectedly that that's bad for equities," he said. "And if something's bad for equities, that could lead to a risk-off trade."