His remarks come days after he had expressed disappointment over Infosys under Mr Nilekani giving a clean chit to the company's acquisition of Israeli firm Panaya. 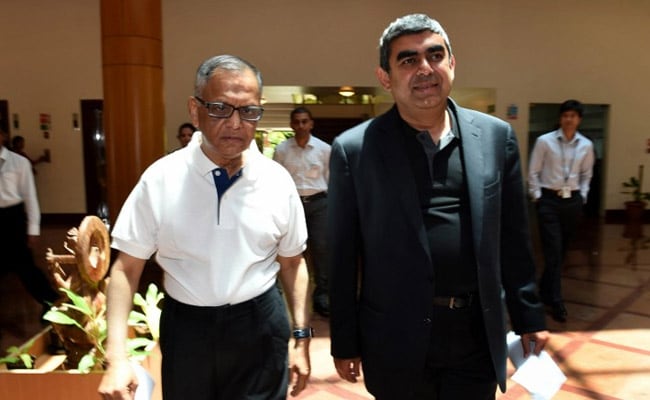 Mr Nilekani has the skills of simplifying "lots" of complexities in Infosys, says Mr Murthy.

Bengaluru: Infosys founder N R Narayana Murthy said on Wednesday that all is well in the company and its Chairman Nandan Nilekani has the skills of simplifying "lots" of complexities in the software major. "Absolutely, all is well. Remember, in my speech with the investors, I said now that we have Nandan as the chairman, we can all sleep well," he told reporters after the announcement of winners of Infosys Prize for 2017-18 here. "He (Nilekani) is a very organised person. His strength is simplification of complex ideas. There were lots of complexities and therefore he has his hands full," he added.

Murthy also said, "Let's leave it to him and let's all keep quiet, so that he can do his job well."

His remarks come days after he had expressed disappointment over Infosys under Nilekani giving a clean chit to the company's $200 million acquisition of Israeli technology firm Panaya.

Murthy, had on October 24, expressed disappointment that none of the questions raised by him on "poor governance" had been answered by the company's board with transparency.

On scouting new CEO for Infosys, Murthy said there is no need to give advice to Nilekani because he had been a good CEO himself.

"Having been a good CEO himself he knows what is required. So, there is no need for advice," he said.

Some names including former Infosys executive Ashok Vemuri's had cropped up in the media but he has reportedly expressed his unwillingness to accept the job.

Promoted
Listen to the latest songs, only on JioSaavn.com
Vemuri had quit Infosys in 2014 after Vishal Sikka was brought in as the company's CEO and managing director.

Sikka had quit amid turmoil in the company after a prolonged battle between the Board and the company founders leading to the return of Nilekani, a company co-founder, at the helm in August.