In December, the new Mumbai AC local train started its run on the Borivali-Churchgate section of the Mumbai suburban line under Western Railway. 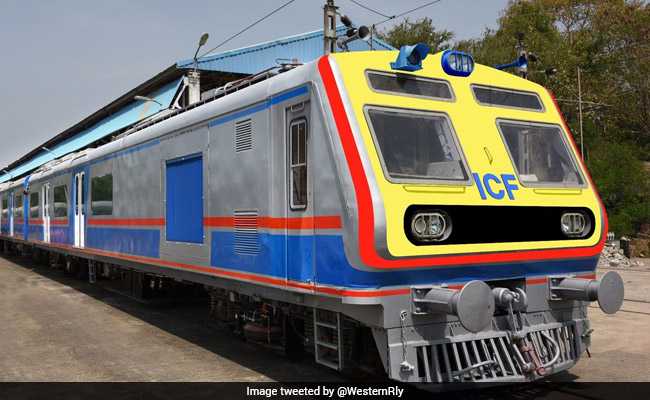 Indian Railways commenced operations on its much-awaited Mumbai AC local train service from Churchgate to Virar today. With that, Mumbai passengers got the AC local service hailing out of Churchgate to Virar on the first day of the New Year 2018. The air-conditioned coaches of the new Mumbai local started their run from Churchgate to Borivali in December 2017. According to media reports, the Western Railway - which caters to one of the zones served by Indian Railways - launched service on the full stretch between Churchgate and Virar on January 1, 2018.

In December, the new Mumbai AC local train started its run on the Borivali-Churchgate section of the Mumbai suburban line under Western Railway. Equipped with new features, the train is aimed at ensuring a safer and more comfortable journey for passengers, an official release said. From January 1, the Mumbai AC local - running from Churchgate to Virar - will have 12 services per day, news agency Press Trust of India had earlier cited WR chief spokesperson Ravinder Bhakar as saying.

The difference between 1.3 times and 1.2 times will be shown in the ticket as discount during the introductory period, according to the press release dated December 24.

AC EMU ticket holder shall also be allowed to travel by first class compartments of local trains. The Ministry of Railways also detailed the fare charges of AC local train:

The new train service operates with a fully air conditioned rake with a capacity of 30 tonnes per coach. The new Mumbai AC local has a passenger carrying capacity of 1,028 seats.

The new Mumbai AC local operates with stainless steel coaches having straight side walls. The train operates at a maximum speed of 100 kilometres per hour.

The coaches are equipped with automatic door closure systems, LED-based lighting, LED-based coach identification systems (for alarm chain pulling and door malfunctioning) and emergency talk-back systems. The train does not start or take traction with any of the doors open.

Promoted
Listen to the latest songs, only on JioSaavn.com
The Mumbai AC local has been provided with modular polycarbonate seats, aimed at the comfort of passengers, and wide double-sealed glass windows for panoramic view, among other features.

The rakes are also fitted with GPS-based passenger information systems, equipped to provide features such as passenger announcement, communication (between the driver and guard) and coach displays, among other features.

The AC train services will not run on Saturdays and Sundays for maintenance purpose, the railway ministry said.

The Ministry of Railways also compared the fare charges of the 1st Class and AC Local seats (base fare * 1.2 times for the first six months):