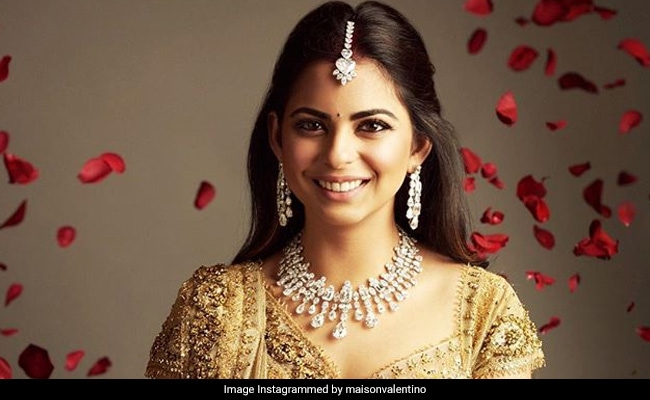 Mukesh Ambani introduces his daughter Isha as leader of Reliance group's retail business on Monday; in another sign, the billionaire is pushing ahead with a plan for succession in one of Asia's richest families.

The objective of this business will be to develop and deliver products and solve every Indian's daily needs, with high quality products at affordable pricing, she said.

"As part of our commitment to India's rich culture and heritage, we will soon start marketing quality goods produced by tribals and other marginalised communities across India," Isha Ambani said.

This will not only provide a gainful opportunity for employment and entrepreneurship but also help to preserve the talent, skill sets and knowledge base of the Indian artisans, especially women.

Reliance Retail has opened over 2,500 stores this year to take its store count to over 15,000, spanning an operational area of 42 million sqft.

"During the year, we strengthened our own brands' presence by launching several new products across categories of Staples, Home, Personal Care and General Merchandise. Further, we launched our WhatsApp-JioMart partnership," said Isha.

Isha, 30, is an alumnus of Yale University and is married to Anand Piramal, son of Piramal Group's Ajay and Swati Piramal.

That suggests Mukesh Ambani has started the next phase of leadership transfer after giving his son the leadership of Reliance's telecoms division.

Indeed, the announcement on Monday is the next sign of change in Ambani's empire after the billionaire last year had said his children would have significant roles in the business, adding Reliance was "in the process of effecting a momentous leadership transition."

Reliance Retail and Reliance Jio are subsidiaries of the family's oil-to-telecom conglomerate, of which the $217 billion Reliance Industries Ltd. is the flagship firm. Mukesh Ambani is chairman and managing director of Reliance Industries.