Reliance Industries Ltd., India's most valuable company, said it has become free of net debt months ahead of its March 2021 target after raising over $23 billion from stake sales and a rights issue.

The conglomerate controlled by billionaire Mukesh Ambani, Asia's richest man, said in a statement Friday that it secured Rs 1.16 lakh crore ($15.2 billion) by bringing investors including Facebook Inc. and a slew of funds into its digital business, raised Rs 53,120 crore selling shares to existing investors and also sold a stake in its energy business to BP Plc.

The 63-year-old tycoon, who made a pledge to shareholders in August to slash the group's net debt to zero within 18 months, went on a fundraising spree starting late April, defying lockdowns sparked by the coronavirus pandemic. After a planned $15 billion stake sale in his oil business to Saudi Arabian Oil Co. stalled, he set out to prove skeptics wrong by luring partners to Jio Platforms Ltd., a technology venture he's using to pivot his empire toward e-commerce and digital payments, away from its legacy oil-and-petrochemicals business. 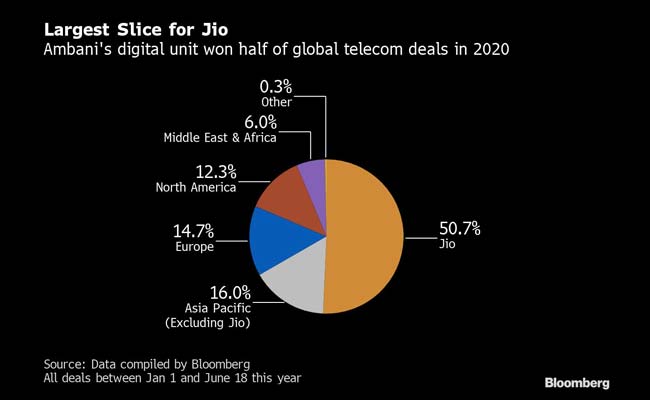 "It's an amazing lockdown achievement," said Chakri Lokapriya, chief investment officer at TCG Asset Management in Mumbai. "The move tells investors that Reliance is transforming the company's growth engine to a technology platform."

Reliance said Friday that it had racked up net debt of Rs 1.6 lakh crore as of March, most of it for rolling out its wireless carrier, Reliance Jio Infocomm Ltd., which became India's biggest within three years of its 2016 debut. Shares of Reliance rose as much as 2 per cent in Mumbai to a record on Friday, giving it a market value of $144 billion.

"I am both delighted and humbled to announce that we have fulfilled our promise," Mr Ambani said in the statement.

Saudi Arabia's sovereign fund was the last to invest in Jio Platforms, announcing its decision to plow $1.5 billion on Thursday for a 2.32 per cent stake. The investments -- totaling roughly 25 per cent of Jio -- now value the equity of Jio at about $64 billion. Reliance said the Saudi inflow marks the end of Jio's current phase of roping in equity partners.

Jio has attracted more than half the $30 billion investment into telecommunications companies globally this year. Investors are betting on Jio's access to India's huge consumer market and its potential to shake up traditional industries in the country -- from retail to education and payments -- with its technology.

India is the only major open Internet market where foreign technology giants such as Amazon.com Inc., Walmart Inc. and Google's parent Alphabet Inc. can compete for market share. In a move bolstering Mr Ambani's ambitions, Reliance is closing in on a deal that would see it acquire stakes in some units of retailer Future Group, which already has a partnership with Amazon, people familiar with the matter said this week.