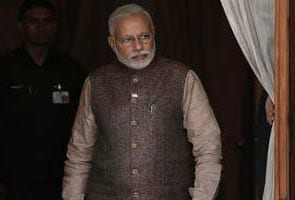 Global rating agency Fitch has said India's economic growth will accelerate to 5.5 per cent this financial year and 6.5 per cent in FY16 due to the clear mandate received by the Narendra Modi government.

"The clear electoral mandate of the BJP-led government gives it the ability to pursue far-reaching economic reforms...we have increased our GDP growth forecast for FY16 to 6.5 per cent from 6 per cent and project real GDP growth to pick up to 5.5 per cent in FY15," it said.

It also said the budget will give more indications on the government's policy intentions and implementation of the measures will clarify the level to which growth can be boosted.

"Previous periods of high growth illustrate that potential for significantly higher growth rates certainly exists, but that would imply higher savings rates - including through fiscal consolidation, productivity gains through reforms, for instance related to governance, and product and labour markets, and the elimination of infrastructure bottlenecks," the rating agency said.

The agency, along with rival Standard & Poor's, had said it would downgrade the sovereign ratings to junk about two years ago on concerns over the widening fiscal deficit and low growth. A lack of decision-making by the previous government had also featured prominently in the commentaries.

While Fitch did not say anything about the possible impact on the sovereign rating, it said the likely impact from a below-par monsoon has been considered while arriving at the growth estimate of 5.5 per cent for FY15.

The agency said there will be significant risks to growth if the monsoon turns out to be much weaker than the India Meteorological Department's projection of rainfall likely to be 93 per cent of the long-period average due to the high probability of an El-Nino event in the Pacific Ocean.

Promoted
Listen to the latest songs, only on JioSaavn.com
A weak monsoon is likely to hit already-high food inflation even as retail or consumer price inflation was at 8.3 per cent in May, it said.

However, it hinted that food inflation will remain contained on recent government announcements on reforms in agriculture produce markets and food distribution fronts, as also the Reserve Bank of India's resolve to get CPI (consumer price index) down to 6 per cent by January 2016.